Recently, I was questioned about my favorite guide flies. A half dozen magic flies that seem to put fish in the net whenever the time is right. I have fished with a variety of fly anglers over the years. From the guy who will only use a parachute Adams- ALL DAY, to the gent who switches out a fly every time he sees a rise, often missing the rise form and many opportunities along with it. True, there are a few flies that seem to be catch-all favorites, but I have noticed these change from year to year. A few years back, it seemed like a traditional olive, orange or yellow Kaufmann’s Stimulator was the winning pattern.  Then, a couple years later, Swisher’s Royal or peacock Madame X, along with her split personality- the (parachute) PMX was the winning combination. Nymphs have followed a similar evolution, from the bead-head Hare’s Ear & Sawyers Pheasant Tail to the more modern Barr’s Copper John and Two Bit Hooker, but a few stand-by’s will always be in my fly box for any scenario that may present itself on the water. 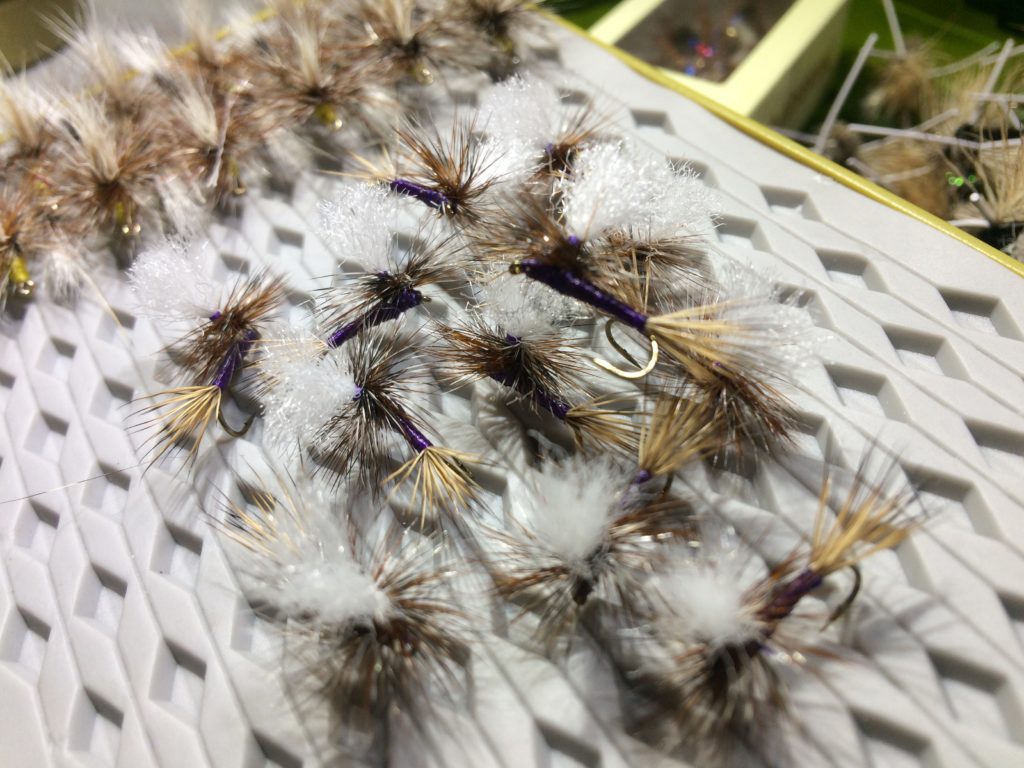 Dry Flies. As far as dries are concerned: never be without an Iso pattern as they hatch most of the year. My preference is Bear’s Iso/drake pattern, a close second is the Dave’s Oh-So Iso. I would be reprimanded if there was no mention of the Borchers Drake from local legend Ernie Borcher in Grayling, many early evening risers can be  duped with a dark turkey bodied mayfly.  These all replicate darker mayflies. North Branch anglers need an arsenal of sulphurs, tricos and a supply of BWO’s for most days on the river. If something lighter emerges, throw a Roberts Yellow Drake from Clarence Roberts. What works on the Au Sable River may not prove as effective on nearby Manistee or smaller rivers like the Jordan, Pigeon or Sturgeon Rivers. I will never be on the Upper Manistee without Regans Hairy Drake– they are a hot commodity and can be found at Ron’s Fly Shop in Grayling as Mr Jerry Regan is often buried with special orders. Don’t be afraid to use as a searching pattern during the day when nothing is hatching. For reasons unknown to us, large fish often look up when the time is right, and if a meaty snack drifts by, you could have the proper offering. The advent of new materials often presents us with a myriad of new flashy dressed up classics- the Purple Haze and Patriot Fly are in the category of not replicating a certain insect per se, but curious trout will inhale without inquiry.
Caddis flies often dart and dance across the rivers pocket and slack water below a riffle zone, don’t be without a Mercer’s Missing Link, as it has saved the day on many frustrating hatches. Don’t hesitate to use it as a searching pattern in beaver ponds or the big water below Mio. There are those of the soft hackle persuasion, and I cannot argue with the effectiveness when hatches are difficult to discern whether actual surface feeding or just below. Swing an Orange & Partridge or Peacock behind a more visible fly for an increase in hook up ratio.
Going deep~ if you have yet to turn to the dark side, the time is now. Nymphing. More specifically, Euro Nymphing with a tight line approach and a variety of deep diving tungsten weighted nymphs will increase how many times you wet your net per outing. Often two is better than one, the first fly will be your point fly, make it a Tungsten Surveyor or Dura-Cell Jig fly.  The second fly, tied on 18-24″ drop line, is your tag fly.  You may wish to imitate a micro mayfly or sow bug/scud, this can be done with Egan’s Rainbow Warrior, Walts Sexy Worm or The Frenchie.
Terrestrials~ They aren’t only for August. I have thrown a few rubber legged hopper looking bugs in early June and late September with definitive results. The Skopper from Tim Neal combines the criss cross legginess of the Chernobyl Ant and the double buoyancy of stacked deer hair, similar to the Skunk. Madsen’s Skunk is a multi-purpose fly, it can be used as a terrestrial or dunked and work as a wet fly- subsurface. Little brook trout aficionados will want to follow a popular Driftless fly lead with the Hippie Stomper from Andrew Grillos for anytime non-stop action. 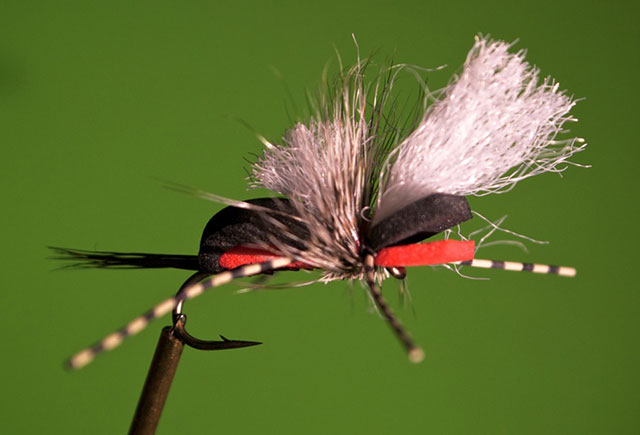 Which would you choose? Hippie Stomper or Skunk? Both have proved their worth in my fly box. 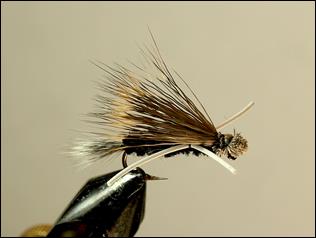 Which would you choose? Stomper or Skunk?

Streamers ~ Although Bob Linsenman and Kelly Galloup collaborated on the essential book about streamer fishing that broke the mold, many books have since been written about monster fish, eye-catching, articulated flies. The multi-faceted world of streamers and the plethora of synthetic materials that seem to inundate us from year to year. Each new product  comes with various claims of added life or lifelike movement never seen before. These can be geared to see to the angler/tyer more so than the fish.  George Daniel and Rich Strolis have both compiled excellent books on the subject, while Mike Schmidt of Anglers Choice Flies has been knocking out killer patterns for years. Mike’s Red Rocket, Grumpy Muppet, & Meal Ticket–  Strolis’s Ice Pick, Headbanger Sculpin, & Hog Snare – and George Daniel’s GD Sculp Snack are all top in my meat-locker fly box.

Once in a while you need to pull something out of the closet and dust it off. Trout seem to acclimate to what they have seen time and time again. This is the number one reason why I have had a few banner days on the Manistee with Ray Schmidt’s Rattlesnake. It has the movement and attitude spurring ability of flies twice its size, yet the fish seem to be of a new generation that don’t recognize its agenda. The Zoo Cougar will always be a standard in my streamer box. In yellow, white, black and olive, it has fooled trout and steelhead to big browns for well over two decades. I believe it is primarily the over-wing and its swaying motion coupled with its neutral buoyant deer hair head that pushes and pulses its way from log to log, enticing trout out from their shadows.

What are your favorite flies? There are a multitude more to mention.  This was merely the tip of the iceberg. I find that my favorite flies are often the ones that I am using most, which also seem to produce because I have faith in them; hence, using them more, so on and so on. No matter what flies are your favorite, get out and find some new water, try a new pattern and hopefully connect with a few fish.  After all, that is the best part, and the very reason why we tie and try so many different flies. Tight Lines!!