The word is getting out. IF you haven’t heard, you must be tanning, imbibing a Belikin while working on your bonefish game in some balmy latitude near the 16º mark, or even closer to the equator. The Au Sable River, more specifically, the HOLY WATERS is being threatened. The Owner of Harrietta Fish Farms LLC has purchased/leased the former Grayling Fish Hatchery for a few dollars over the next five years to utilize it has a commercial fish farm. The DEQ permit stated the ownership can take place as long as it is maintained as a tourist attraction, allowing visitors to come, fish and/or feed the fish on tours. This wouldn’t be a problem in many other parts of the country, or world for that matter. BUT, this is where it becomes technical, the fish farm will up its annual fish production from 20K pounds of fish per year to near 300, 000 pounds of fish per year. If you have never been to the Grayling Fish Hatchery, which was built in the early 1900’s, it is a river fed/run through hatchery system, whereby, the upper stretch of the cement runs divert much of the river to feed all of the canals fresh, cold and vibrant water from the East Branch of the Au Sable River. That is not the issue. It is at the terminal end of the hatchery, where there is an outdated excrement catch basin whereby allowing the feces of some 300K pounds of trout to enter directly behind the hospital and soon to be a part of the mainstream Au Sable. The new hatchery will employ 2 people. The potential threat of the Holy waters becoming a sewer for this Fish Farm would not only devastate the pristine trout populations downstream, it could harm the livelihoods of many guides and fly shops that make this beautiful river an annual part of their home waters. The Anglers of the Au Sable need you help. They have reached round #3 FUND RAISING to approach and fight this devastating scenario. IF this goes through, other fish farms in the state may have the option to get DEQ permitting to allow similar farming practice on a river in your backyard. Here is a link to ANGLERS OF THE AU SABLE where you can get more information and help the cause. 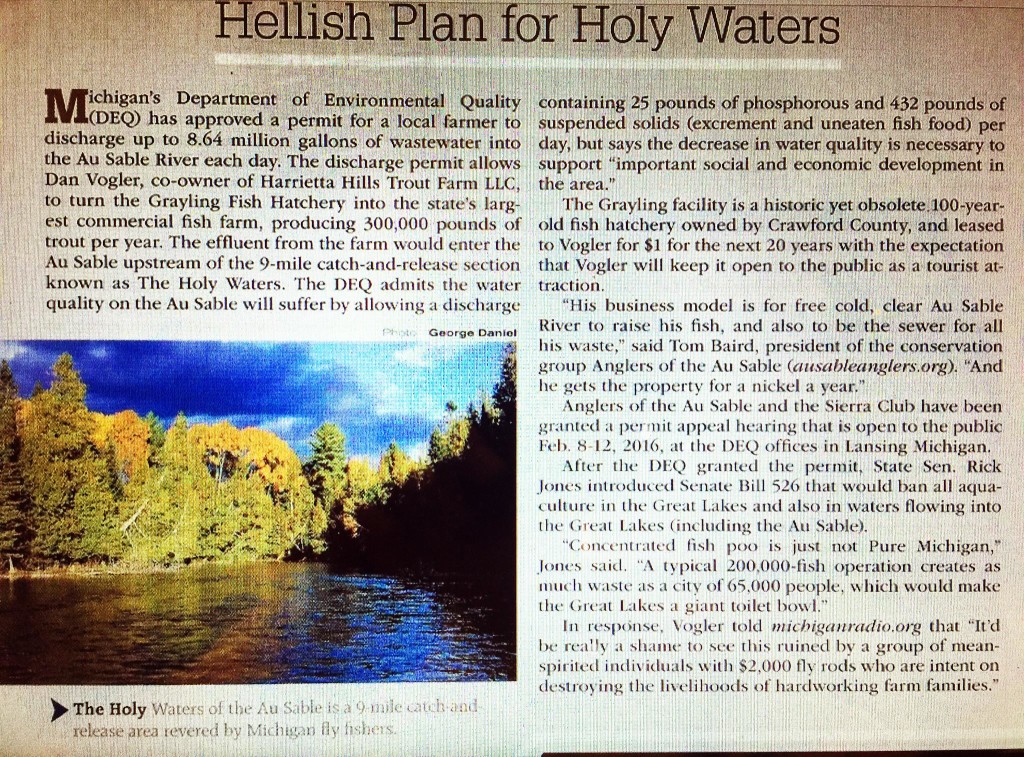