The week was feverish with phone calls and e-mails dispersed across various social media outlets. I had a Saturday off from the restaurant and guide trips, it was also the first week in November and the forecast looked ‘fishy’. Wind gusts 20-30 mph, chance of rain greater than 80%, high in the mid 40’s, time to hit some water. Personal messages and voice mails we returned with mostly ‘we regret, would love to but …’ Previous engagements held many back from joining me on my freshwater quest. Then, late Friday afternoon I received a text message from Thomas Menas, on his winter sabbatical from Minturn Anglers in Vail, CO he had a free day on Saturday and would love to hit some water with me.
Where shall we go? Browns are aggressively stocking up on their post spawn feast and debauchery on many of our rivers. A twenty minute scouting trip to the Boyne River has revealed a few steelies and voracious eager little browns hiding in the woody debris. The Lower Jordan would prove worthy, so would many sections of the Upper Manistee or the Au Sable River. The thought of floating the fast water of the Sturgeon River for the emerald bullets that have infiltrated its cold and oxygen rich frigid waters has a certain appeal. Or a quick trip over the bridge to the fabled Two Hearted River, or nearby Carp River. Then Thom throws another option in the mix that I had never even considered.
“How about we float some secret waterway for Musky?” debated my fishing buddy. I have yet to be infected with the toothy GLMV (Great Lakes Muskellunge Virus), but would happily comply. 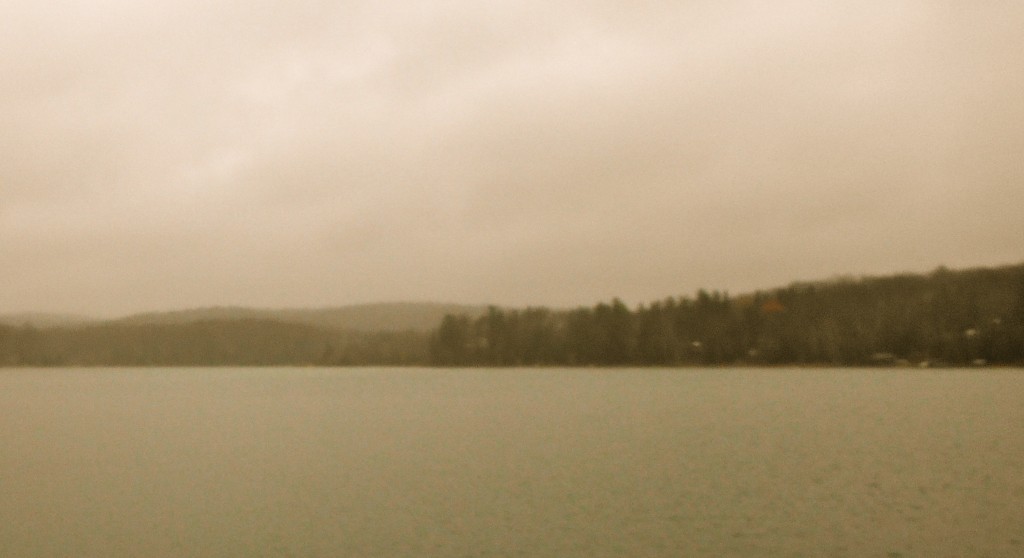 Then a few other options slowly crept into the back of my mind and it became apparent to me, once again, we are blessed. There is such a bounty of great water in this little corner of the Mitten, and I haven’t even tapped some of the better resources simply because they are either designated trout rivers and closed for the season or are crowded with a multitude spawn baggers and spider wire anglers hoping for one last desperate salmon carcass to double their Ugly Stick before they head off in to the woods in search of a wayward Bambi.
We suited up in our Waderwick stirrup Robin Hood Tights and Simms Rubber pants and met early Saturday afternoon at a nearby boat launch to make a plan from there. Zach has just returned from his half-day guide trip and might be interested in joining our blustery rendezvous with ‘River Q’.
Recent stocking reports from the Department of Natural Resources gives me an inclination to check out a little lake we have all driven by a hundred or more times and often considered but haven’t visited since High School Church Camp where I sang songs at nightly campfires.
The access is simple and vacant, void of other trucks and trailers. The clarity of the water makes reading the drop offs and vegetation simple and and almost ethereal. For a moment, we joke about being in some lake in the middle of the Canadian Shield, miles from civilization, while we can hear a logging truck round the bend and begin to work his air brakes.
We never had time to dig in the Yeti for snacks and sodas, we were too busy keeping our course and working streamers deep and fast. All we wanted was to find fish, get a chase and chalk it up a ‘Good Day.’ Then Zach got a slam on his streamer, on for a second and shortly off. Perhaps a toothy villain was toying with us, or one of the smaller stocked trout I had read about. Then Thom got a smash, more like he was broadsided by a bus. His rod had a healthy bend in it and we saw the flash of a decent fish. The Mackinaw made a dash for deeper water, crossing the bow of the Adipose and lunging for a darker zone. A brief moment later, and deft net job, we had our first backyard stillwater streamer laker in the bag and measured up to O’Keefe status on the Idylwilde tape measure. Well worth our time and trouble, getting soaked and blown around, to find such a gem in a matter of minutes from our homes. We pass the time exchange guide trip stories. 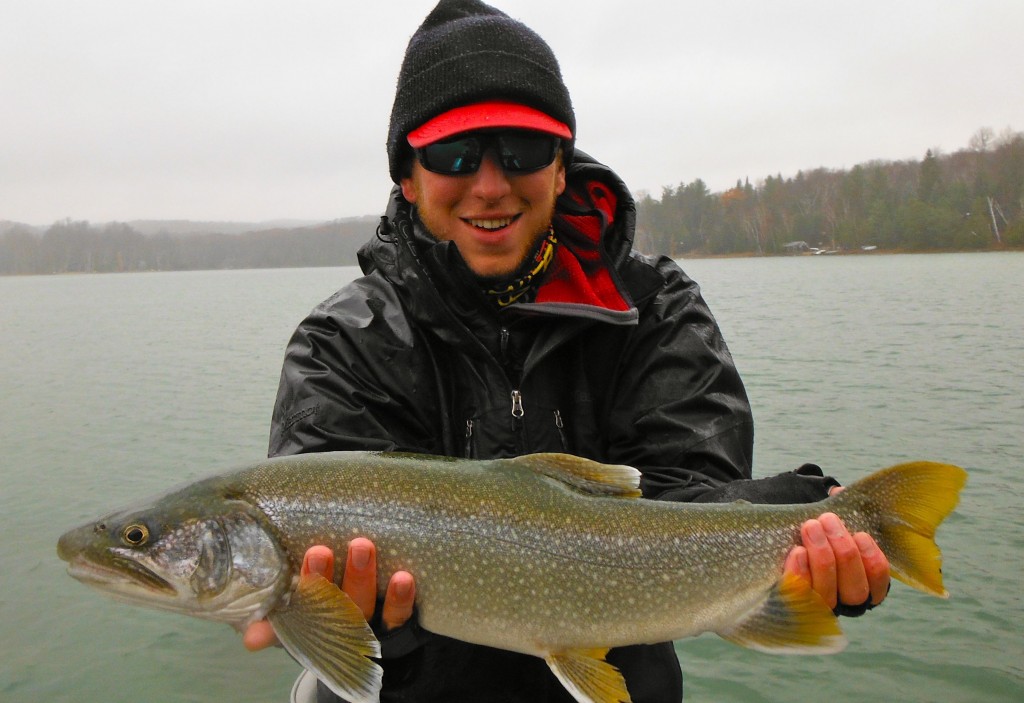 Thom’s tales are always larger than life itself, like he guides for Paul Bunyan Outfitters. Whether being chased down a by bull moose in the high mountain lakes of Colorado or being stalked by a mountain lion, or nearly zapped by an electrical storm at 8,000 feet, it kinda makes my pathetic fear of coyotes in the distant fairly obsolete. Then Zach gets his, a nice Splake with colors a touch more iridescent than his non-genetic hybrid cousin the Laker. At the end of the afternoon, we were soaked, but tapped into a great little fishery that was exciting and refreshing. We had a great day on the water, catching up and catching a few fish. Although the footage I caught on my GoPro was lost when I failed to eject before unplugging the USB cord, I have a pretty good idea where we can go to do it all again, and we won’t have to drive a few hundred miles to enjoy the treasures we have right in our own back yard. Tight Lines!