We meandered through a series of dirt roads and past a few farm houses in the rolling countryside, noticing the finite color on the determined oak trees as they held on to the near rust color leaves. The lake seems to be cradled by the surrounding blend of conifers and hardwoods, not a house nor cabin on its shores, it has a feel of a desolate Canadian lake along the Algoma railway. I am guilty of taking such precious little havens as this ecosystem for granted and my guest kindly reminds me of the treasures I have literally minutes from my tying desk. Our conversation runs the gamut from the idiotic government shut down to the upcoming anniversary of the Sandy Hook tragedy and other recent school related headlines that could be written for a television series. 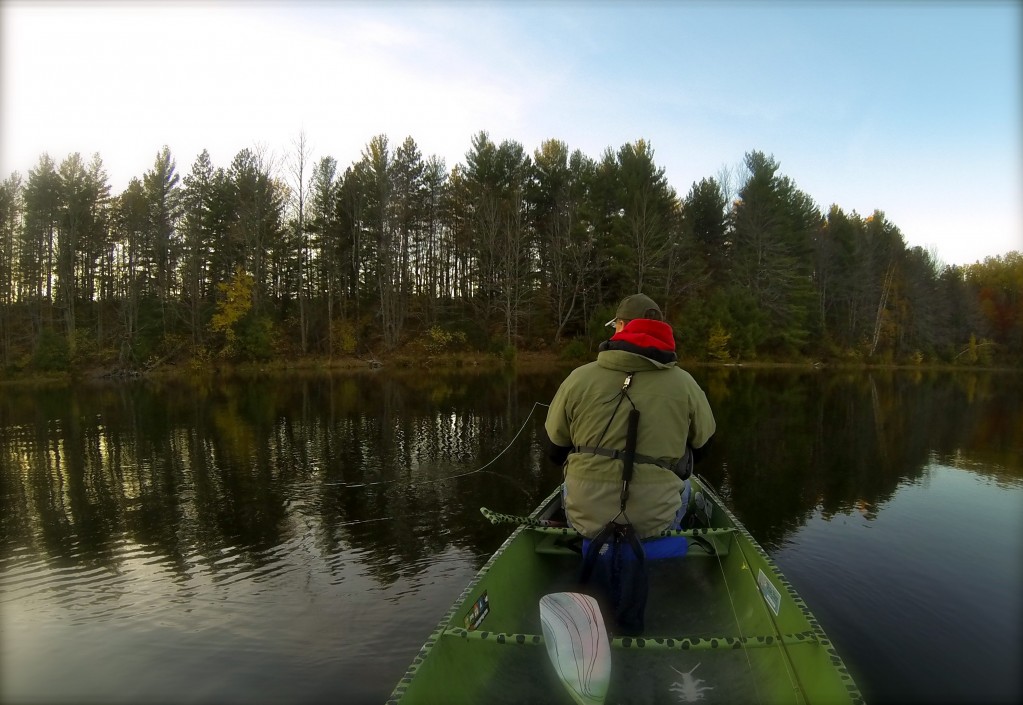 My good friend is visiting from Florida. He has a passion for the fly rod as much as I do. He reminds me of a benevolent and taller version my father. I wouldn’t normally permit myself to delve into the scary realms of religion and politics, my years of bartending have taught me this basic lesson, but I know I my beliefs are safe. Gun control, health care, privacy protection, Obama-care, phone line tapping, various advancements in technology, the world changing at a rate faster than either of us care to acknowledge as we post status updates and check-in on various applications. We stay connected via the very same social media that we fear is raising our children and grandchildren far too fast. Then it happens. No Service. We have reached the outer limit. The towers of technology apparently can’t bounce a signal to me as we shove off into the dark onyx lake. This is what we live for. The depth and mysteries of this lake are as shrouded as our future. We are unplugged. Slicing across the lake and swinging bead-head buggers. Then, slowly twitching flashback pheasant tails and brightly shining Copper Johns to unknown hungry trout that patrol this kettle shaped lake like security guards or sentinels protecting and devouring anything that may enter the No Trespassing Zone. 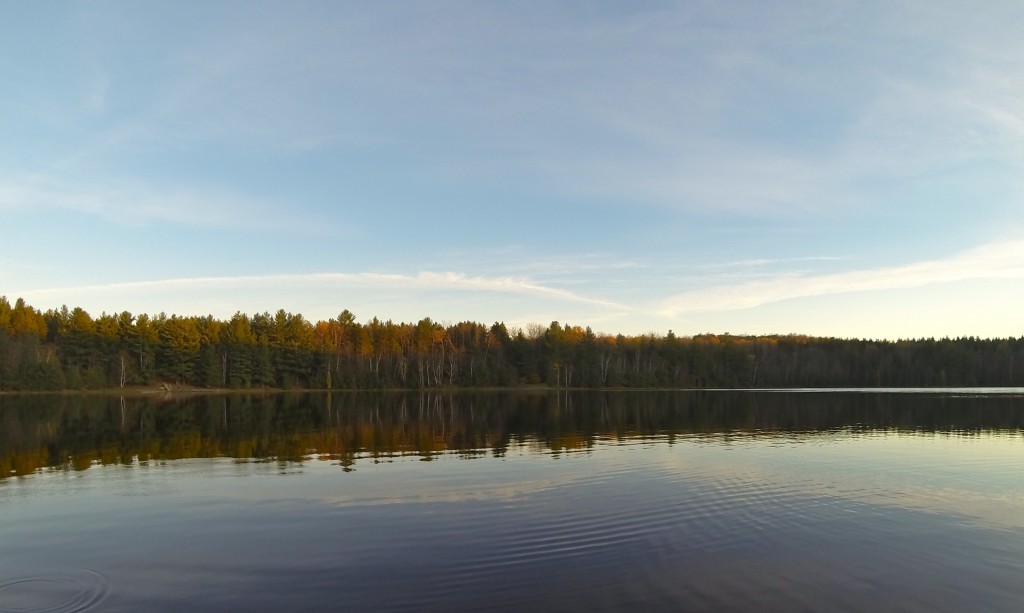 Darkness quickly envelopes the lake as the early setting sun vanishes behind the tree line. We are less than successful in our still water trout quest. I noticed two anglers earlier on the shoreline with a fish splashing attached to a stringer. They may have been privy to the secret garden hackle method I have yet to resort to, but it sleeps dormant in the back of my mind. Something miraculous happens in the north this time of year. The night time skies were clear, and I noted a brightly shining star to the South. “That’s Jupiter. I wouldn’t know it but Jan kept telling me for the past week on our evening walks.” My friend tells me.
We are both getting chilled and decide to call it an evening. As we paddle back to the opposite shore, we pause and take in the splendor of what God has made for us to enjoy. Not many people get to see moments like this. Crystal clear skies, stars everywhere, reflected on the glass smooth lake. So close, you think you can feel them at the edge or your paddle. The thermometer dipped to 27 during our time on the lake, explaining the relative quick shut down of the fish and frozen guides on my fly rod.
On the way home, we talked of grape varietals and the protection methods of citrus farmers in the sunshine state. How little we know of science and nature that we have come to appreciate more as we get older. Someday, I will travel to Florida to cast for redfish and the glorious shad runs that begin in a month or so. My friend then mentioned something that struck a chord. Nothing that was out of the ordinary, not for me. He was impressed that in todays world of deadlines and priorities, he got a response shortly after he messaged me on Fishbook. I gave him the latest fishing report from the Boyne River and that a fresh push of salmon had entered the system and he needn’t bring anything and he could borrow my 9 weight to test his skills on some of the rather large anadromous fish in the river.
We talk of values we place on certain things, material items and services. But we forget the value of times and places. Specific journeys and events that can’t be bought. The first big trout you catch with a fly during the hex hatch in the middle of darkness late June thigh deep in a swift current. How much is that worth? Experiencing a new river or lake, estuary, or lagoon for the first time during a major run, no amount of money can buy that. This is my epiphany. He was so impressed that I would offer my small arsenal of salmon sticks so he might catch a beast of a fish, he showed his wife. This is what we do. We don’t think about it. It is the brotherhood. It can be difficult for others who don’t know to understand, but someday, the friendship of a generous angler will be shown to you.
I came to my own personal conclusion on my way home that evening. I am in the middle of some great rivers and lakes. I shall take advantage of those pristine places more frequently. It is often too easy when some great resource sits merely feet or miles from your porch, to sit idly in from of the TV or PC and waste time away watching reruns or posts about others in outrage because of a referees poor judgement, instead of getting up and becoming engaged. I made a solemn promise to myself, to unplug and become more engaged. See you on the water.