By the time you are reading this, the midwest will be enveloped by a cold front, daytime highs in the fifties for the first week in June? Without a doubt, a very long way away from the muggy and stickiness of a few days ago when the mercury danced in the mid eighties, more like summer, and the bugs would agree. Feeling like midsummer heat turned my thoughts to the ever cool, skinny brook trout waters I love to explore. Newly intrigued fly fishing angler, Jacob K. joined me for some beaver dam brookie hunting. 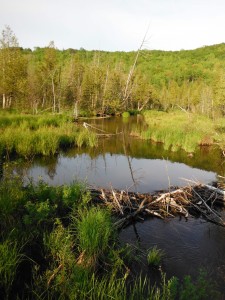 So much fun to watch when another angler so eagerly wants to learn and soak up as much as they can in the world of fly. We tapped into a few of the gorgeous little char species in the spring fed headwaters before deciding to head to another favorite locale.
He was the strong silent type.
I could tell by his deliberate sips from the the viscous surface.
His takes were unlike the splashy and showy variety others displayed in this deep dark water.
This fish was certainly worthy of the moniker ‘King of the Hole’- he quickly would become my Unicorn> my Hog Johnson.
I didn’t yet know that I showed up to a gun fight with a pocket knife.
There seemed to be some cottonwood pollen floating down the gently swirling currents, but then I noticed they began to wiggle and squirm. Then, I saw a familiar tent shaped triangle appear above the waters surface, only to be quickly slurped up by an underwater shop vac. Hmmm… Really? Do my eyes deceive me? Those can’t be, but I think they are, most certainly not the grandaddy mayfly of them all, but a sizable ephemeroptera nonetheless. From a distance, I couldn’t decipher, but they were not brown drakes, possibly the elusive Red Hex- the recurvata. I did not have my big drakes or hex flies with me, my only option was to tie on a #14 Adams or Stimulator. Jacob got the first solid take of the evening, as he was bringing him in, my first thought was it may be a huge brookie. After all, I hadn’t caught anything else up here, except for a few 4″ coho smolt. Upon landing the fish, I was surprised to see a gorgeous 17″ brown. 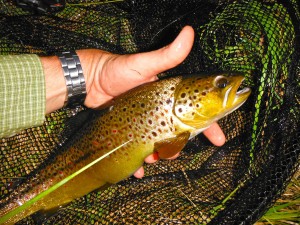 SHOCKED! Where did this guy come from? When? How often? My mind is flooded with a series of unanswerable queries. Quick foto and in the soon to be matted sponge-weed-muck bottomed waters. More fish are slurping in sporadic patterns across the onyx glass-like surface, and the mosquitoes have come out in full force. My 7.5 foot three weight Redington wasn’t prepared for what was about to go down. A #16 parachute Iso-spinner was quickly consumed by a giant fish of Loch Ness proportion for this section of water. My Ross screamed for a minute and a half before the 6X popped.
We saw a glimpse of the massive submarine as it cruised near the shoreline and took a hard run down stream. My heart was in my throat, amazingly, I remained calm. It wasn’t meant to be, not right now, not this way. All I had in my Fishpond San Juan was a selection of Elk-hair caddis and micro Copper Johns, no net or any other means of landing a beast of that magnitude. We scampered out of that boggy skeeter factory quickly as the dusk closed its curtain to darkness on the faded path through the thickness of Tamaracks and downed Birches from the weight of winter.
The next day was a different story, after all, I didn’t sleep because every time I shut my eyes, auto-replay showed me the various scenarios where I might have had a better chance of landing the monster that would haunt me.
Back out the next evening, well equipped, insect repellant, headlamp, Sage 5 weight, box of my Rainy’s Sparkle Wing Hex, and a large net. Cold front is coming, next weeks forecast doesn’t even mention seventy degrees, it is now or never. First cast, seriously, gorgeous butter belly 16″ brownie. SAWEEET! This is insane, bugs are poppin’, fish are slurping, peepers are peepin, bullfrogs are a croakin’. After five decent fish, and a rather ragged fly, I begin the conversation we all face “Should I leave before it gets too late and dark.” I haven’t seen Mr Hog Johnson. Just a few more casts. Upon the last drift, I was just beginning to lift the fly and a definitive underworld swirl engulfed my tattered fly and quickly slingshotted back at me. S%$#&^%$@!!!!!
That was him! Quick re-cast.
This won’t work.
Really, who am I kidding? A fish of his age and wisdom has surely become aware of me and my presence. I still try, and try again. Next take and the fly comes flinging back at me again.
-Dummy.
-Check the fly.
Hook is straightened and fly looks more like nasty burr of deer hair held together by a single thread.
-Damn!! It is getting really dark and the mosquitoes have grown more voracious and exponentially larger than earlier, perhaps directly proportionate to the size of the feeding fish. Just a theory. The next fly I tie on is one of my own, Deer hair Hex-emerger with some glow in the dark flashabou and grizzly hackle. The very next cast, not five feet into the drift,
>W-W-H-H-hhaaavV-V-O-oomm!!!
I could hear it in slow motion. And I was tight into the fish of my dreams. ‘Big Joe’, ‘The General’, “whatever” he has been ‘known as’ by others before me, soon came to the net. As I lifted him briefly for a quick picture, I felt his massive girth, and contemplated his age. 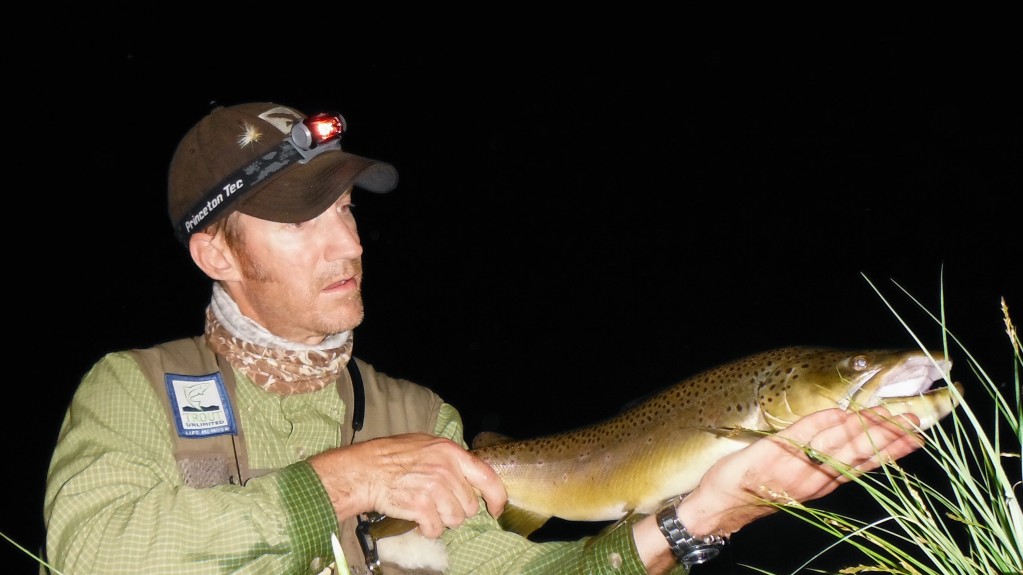 Where did he come from, how long does he hang around here and where do they all go? In the back of my head I can hear my wife requesting me to bring a fish home for dinner. Should this be the one? Nah. I want to do battle with this fish latter in the summer when he may be 27, 28 or even next year at 30+ inches. I want his genes in the river to continue his heritage. But does he have another year left in him? Is it better to bring home a couple 15-18″ fish? 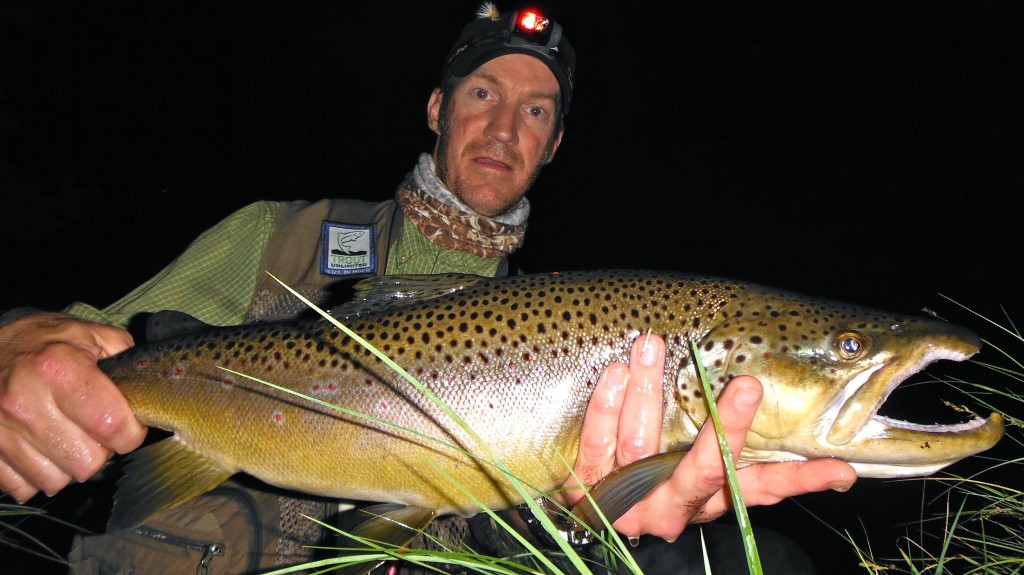 Or is that slot size the primary reproducers? Is this behemoth readily snacking on brookies in this section of the river, or just weeding out the weak ones for a stronger population of bigger specks. Holding the salmo trutta in the water, I had my ‘On Golden Pond’ moment when Henry Fonda hooked the dead loon and realized the brevity of life, I contemplated my own immortality. This fish deserved to swim, and I gently let him glide into the abyss. May we meet again old friend.