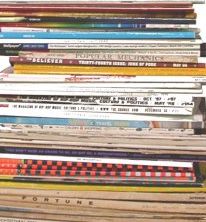 It’s hard not to notice the general decline in the quality of outdoor writing in the hook-and-bullet press. There are notable exceptions, of course, but the truth is that most sporting and outdoor publications are simply not exhibiting the quality or variety of writing that they once were. The best publications, thankfully, are holding up better — I put Gray’s Sporting Journal in that camp, for example — but for many of the mainstream outdoor publications the pattern seems to be to focus on favorable gear reviews for companies that buy advertising, along with a smattering of kiss-and-tell accounts of fishing on the better water. All in all, it is a minimal effort, but apparently it is enough to clear the newsstands, or so it would seem.

To me the Golden Age of outdoor magazine writing can be found in the mid-1960s through nearly the whole of the 1970s, and what set that time apart from now was, above all else, the generally outstanding literary quality of the writing itself.

I say all this by way of prelude as, thanks to the Internet, much of this writing can be revised today in the form of Sports Illustrated‘s online archives. Although you might now associate Sports Illustrated with boobs and bikinis, boxing and baseball statistics, the truth is that, like Playboy, the 1960s and 1970s were actually rich periods for the magazine both in terms of the reach of the subject matter on which they were willing to publish, along with the quality of the writers that they asked to do the work.

A glace at the archives tells the story. 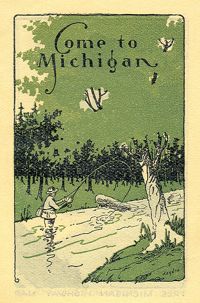 Start with Leland Day’s 1962 piece on fly fishing on Michigan’s AuSable River entitled “Drama of the Mayfly.” It remains as fresh and as interesting as the day it was published. Then check out Hank Babbitt’s 1967 essay, “A Boom and A Blunder On Lake Michigan” that relates the details of the introduction of Coho salmon on the fishery and the impact of that decision in terms of sportfishing expectations throughout the watershed. Babbitt also relates, briefly, the story of the famous 1967 storm that drowned seven anglers in the Sleeping Bear Dunes area (Jerry Dennis relates the details of the same story in his book The Living Great Lakes but from a different perspective).

A few years earlier, in July of 1961, Robert Cantwell told of fishing the Two-Hearted River, coincidently in the week of Hemingway’s death (“The River That Will Flow Forever“). Time and literary attention has demonstrated beyond a doubt that the river Hemingway has Nick Adams fishing is actually the Fox, but Cantwell does a good job of trying to make the facts fit the actual Two-Hearted nonetheless. His remarks about the land and the people of that area — now with a view back of almost 50 years — are worth perusing.

On the topic of Hemingway, take a peek at E.M. Swift’s piece from 1984 entitled “In the Country He Loved,” about Jack Hemingway’s return to his father’s Idaho landscape on a hunting and fishing expedition to the Sun Valley area.

Two favorite writers of mine had their work repeatedly grace the pages of Sports Illustrated in the early 1970s — Jim Harrison and Tom McGuane. Check out, for example, Harrison’s classic, “A Plaster Trout in Worm Heaven” (about the Kalkaska Trout Festival, among other things) along with “To Each His Own Chills and Thrills” (republished these days with the title of “Ice Fishing: The Moronic Sport”).

And here is a special treat — arguably the finest thing ever written on the topic of permit fishing, and perhaps keys fly fishing itself — Tom McGuane’s “The Longest Silence.” McGuane’s essays begins with what I would argue is perhaps the greatest opening line in the history of the literature of fly angling: “What is emphatic in angling is made so by the long silences—the unproductive periods.” This is a Hegelian notion, certainly, but also very much the case.

While you’re at it, take a few minutes to have a look at another of McGuane’s pieces in the vault worth a read — “An Unobtrusive, Shadowy Presence” — on the vicissitudes of hunting bonefish with a fly rod. Originally published in 1972, its another gem that will make most of what you read on the newsstand shelves these days even more banal than it already is.