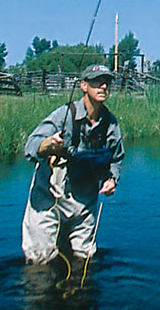 Esteemed fly fishing guru and Michigan native Bruce Richards has retired from Scientific Anglers/3M where he headed-up fly line development and design for many years. Richard’s work at Scientifc Anglers revolutionized fly line design and manufacturing and changed the landscape of modern angling for both freshwater and saltwater species. His approach to fly line design involved both experimentation with coatings (like AST), along with tapers and with the mechanical construction of the line itself (like SharkSkin).

Along the way Richards scored a number of other honors and achievements. He was chosen to be the 2007 Fly Rod & Reel Angler of the Year, he chairs the executive committee of the Casting Instructor Certification Program of the Federation of Fly Fishers, and is a member of the Board for Directors for Midcurrent.

The Midland Daily News did a nice story on Richard’s retirement, and he drops some hints about what he intends to do next both in terms of his professional and personal life. Getting away from Michigan winters seems to be part of the goal — which is understandable.

A few seasons back, the Itinerant Angler did a nice interview with Bruce that focused on the work that he has done at Scientific Anglers/3M. It is worth a listen.

A number of years ago I met Bruce Richards at, I think, one of the old Fly Factory Trout Bum BBQ’s. We didn’t talk long, but I remember that he certainly was the nice guy everyone says that he is. He has a reputation as being on the nicest guys in fly angling. About that time I was living near Mount Pleasant and once in a while would find myself driving by the Scientific Anglers building just east of Midland on James Savage Road. Although it only happened two or three times, it was always amusing to see Bruce out there in front of the building on the casting pond near the highway testing out a taper. You would shoot by at 55 MPH, but there he was happily casting away.