Now we have Didymo, what’s next?

By now, word has spread much like the algal bloom that has made the rock snot a top news concern for trout anglers in Michigan. Didymo confirmed in the Upper Manistee River from November streamer float with water quality specialist Sam Day from LTBBOI. When I first saw it, I was admittedly caught off guard, but apprehensive about the severity. Now, a couple months later and there is a thick mat across the rocky substrate in front of my cabin. I have heard mutterings on social outlets that there is no ‘new discovery’, it’s always been there. Perhaps it has, but not to this extent. What has changed? WHY has it spread so rapidly? Even bigger questions loom in the back of my mind as I tie a few Borcher Drakes for an eager angler/guide debating possible outcomes on a section of river many of us treasure.

So where do we go from here? What are the proper precautions to prevent spreading of this to more treasured trout rivers and lakes? What action do we expect to see from DNR/EGLE? What do we know about this fast spreading algae? How will this impact guiding/fishing and recreational canoe/kayakers? I spoke with Dr. Bryan Burroughs of Michigan Trout Unlimited and Sam Day from the Tribe about these and many other issues. 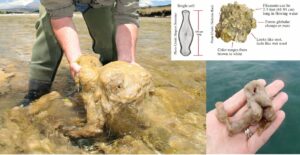 The adequately named rock-snot also called “didymo” (Didymosphenia geminata) has recently been reported for the first time in Michigan’s lower peninsula in a stretch of the Upper Manistee River in Kalkaska County.

It was not coincidence that Michigan TU had been working on a proper procedure for cleaning waders and gear for the past several months, but it was focused on the New Zealand Mud Snail, also invasive and found in the Pere Marquette and other nearby rivers. It was necessary for Dr. Burroughs to make some edits and changes to the current procedures on how clean our gear to include the newly found didymo.

“We need to get into a ‘Hygiene Regimen’ mentality. We need to clean all our gear, from nets and waders/boots to drift boats and kayaks/canoes. You don’t want to be ‘that guy’ who neglects to clean his boots and potentially kills a favorite trout stream.” – Dr. Bryan Burroughs.

This isn’t a maybe scenario. The microscopic diatom can easily hitch a ride in the tongue of a wet sandal or boot from one river to the next. From there, it will bloom and spread, usually thriving in cold, clear low nutrient streams. We need to chemically kill the algae.  Soak your waders and boots in a 2% bleach water solution for 5-10 minutes, rinse and allow to dry. There is some concern about applying a 2% bleach solution to waders and boots. Will this deter the integrity of my $500-600 Simms? Most likely. But in the long run, especially after you do a proper rinse and dry before hitting the water, you should be fine. Jeremy Geist from TU has been doing his research and testing the viability of the algae in certain treatments like 409. Yes, 409 will kill the plant, you can spray it on your waders and boots, allow to set for 15-20 minutes and thoroughly rinse. Let dry. We are not saying to directly spray 409 or any other chemical into the watershed, and 409 is safe enough for you to clean a countertop and eat off the surface, so it should prove safe and effective for cleaning boots. It is key to rinse and dry.  Check. Clean. Dry. Virkon S is a broad spectrum veterinary disinfectant that will kill 31 bacteria strains and 58 viruses. Simply drop a tablet in a large tote/plastic tub with warm water and soak for 10 minutes. Be sure to thoroughly rinse and dry your waders and gear. It was mentioned that stream monitor volunteers need to be mindful or nets and sampling equipment. You shouldn’t sample multiple sections of  a river or stream without sanitizing your D-Nets or gear. The equivalent would be an entire household sharing the same toothbrush. Kinda gross.

Where did this come from? How did we get here/don’t we all clean our gear? There are many theories, nothing for certain as to how didymo made it to the Upper Manistee River, some believe it was an angler who may have been fishing the St. Mary’s and perhaps hit the Manistee a day later without a thorough cleanse, but nothing is absolute. It could be possible climate and phosphorous levels have now made this section water a favorable host for the algae, or it could have jumped in a kayak or canoe who recently visited the Lake Superior shoreline. It doesn’t really matter. It is here now and we need to work hard to get the word out to our fellow anglers and river enthusiasts to control and mitigate the spread. If we have 90% angler compliance and solid promise to clean gear after river use, we may see another twenty years of good fishing in the rest of the river. That longevity would greatly diminish if our participation was only 50% , so it is very critical that we all take a personal pledge to be better at cleaning our boats and gear in 2022. Say “NO to DIDYMO“. 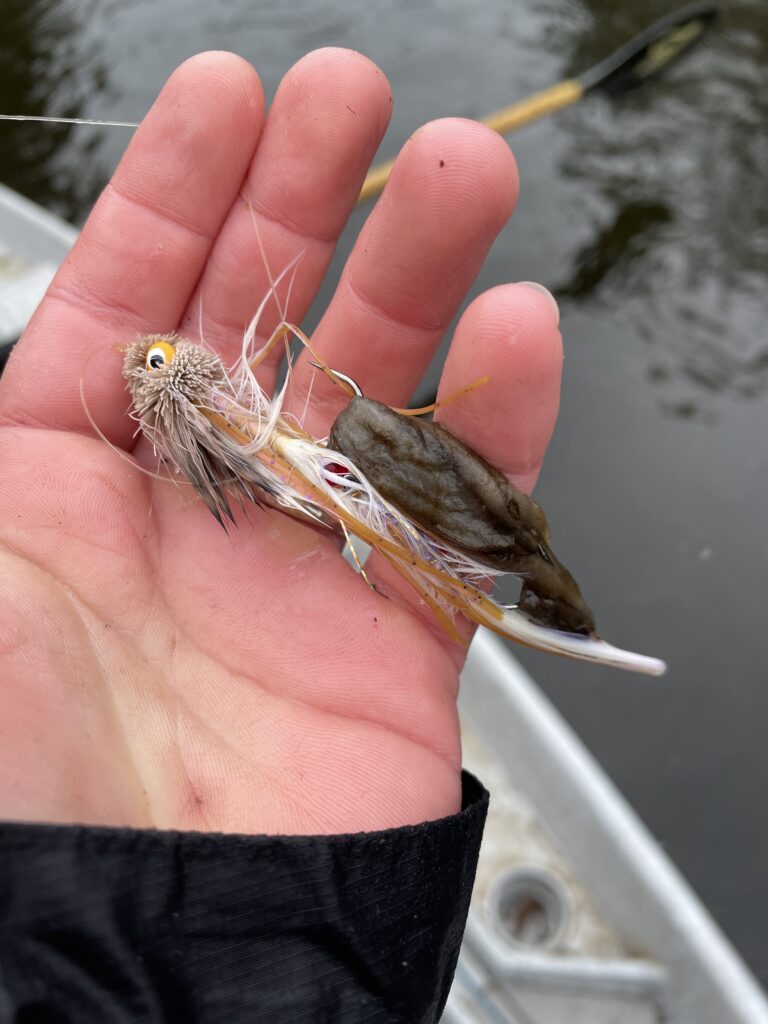 So this brings up the next scenario- as a guide, I am on the river for 50-75 consecutive days and my waders/gear rarely get the chance to completely dry. Many know I am religious and fanatical about keeping my Adipose driftboat clean. What can I say? I like to keep my office sparkling. I will often drive through a DIY car wash on the way home from the river for a couple reasons. First, the muck from some rivers like the Jordan River tend to come clean easier before it is allowed to dry, secondly, it gives my boat some time in between rivers to dry and be a clean environment for my next client. It just so happens that I have more than a couple pairs of boots and waders. I have the luxury to keep a pair at the cottage for the Manistee and a pair for the Jordan River at home, and additional waders for nearby wading. Understand we don’t all have that ability, but it does allow me to fish several different rivers within a couple days without them being properly cleaned and dried.

Talking with Sam Day the other afternoon and he brought up other interesting points. First off is water quality and how this may effect the spread and then how is this invasive?

“It is native to Lake Superior, and until now, no previous records in the lower peninsula. However, it could be that it has been here all along and exists at really low levels. Until now, we are seeing these algal blooms because water quality is improving in these rivers, less phosphorous in particular. In this case, it might not be an actual invasive species, but acts in a very similar manner as an invasive species.”

Here is a short write up from the DNR.

What does this mean for the bug life in the river? How will macroinvertebrates be impacted? It is yet to be determined. SO many unknown variables with an algae like this. For certain, some species will get pushed out of their niches. Crawfish may have less spaces to readily crawl between. Clinger mayfly species like the March Brown, Cahills, and Quill Gordons(Family Heptegeniidae) will lose interstitial spaces from which they use to hide and graze. Large stoneflies(Plecoptera) like the Pteronarcys(Giant Stone) and Perlididae(Yellow Sally) will suffer a similar fate. They need rocky structure for habitat, which is exactly what the didymo looks for to attach. This may also have an impact on many species of caddis(Trichoptera), like the net spinning caddis(Hydropsychidae) who looks for a solid structure to anchor a net base to for catching diatoms in the water column. We may lose entire hatches, but other species may fill in this new habitat. It will remain yet to be seen. 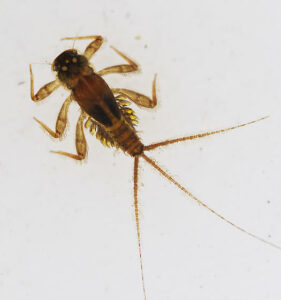 Invertebrates will be impacted. Some of them are Heptageniidae- mayfly clinger. 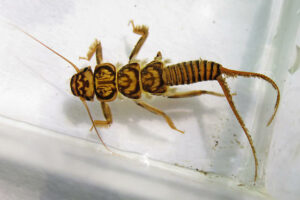 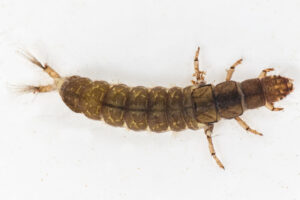 The real threat of invasive species comes from folks who are traveling and fishing multiple rivers in a short (2-3 days) time period. The DNR and EGLE will likely be working on more signage along popular put-ins and take-outs along many rivers. It would be nice if literature could be distributed at kayak/canoe liveries and dealers informing recreational users that individuals should clean your watercraft between rivers. I would suspect True North Trout and MOTHBEAR will be working on a T-Shirt design with proceeds from sales going towards signage and/or more wash stations at the more popular sites along the Upper Manistee. If we all get behind this, routinely cleaning our gear, we can contain the spread and have good fishing for some years ahead.