Harvest limit is one. Proposal by the  actually the NRC. Which is confusing to me. Many are misled to believe this is DNR generated amendment to the Fisheries Order and often these proposals do have their genesis in a meeting of DNR biologists and NRC commissioners. There seems to be some special interest party who has fronted this FO, and many are jumping on the bandwagon. This is the actual proposal by NRC Commissioner Dave Nyberg FO 200.22 Amendment.

Basically, From March 15- May 15 you can only keep one ‘rainbow trout’ on the Pere Marquette, Manistee, Bear Creek, Carp River, Muskegon River and Manistique River. Ok. To be fair, I have kept one steelhead in my entire life, not a staple dinner item. But I am sure there are those who do. Perhaps, now just hear me out, and maybe I am saying something everyone wants to but won’t vocally state- let’s have a moratorium and close steelhead fishing from January 1- April 30? Let them spawn. For just a couple years. Isn’t this the actual issue? We don’t have enough steelhead in the rivers?

Everyone is a Biologist, except the actual Fish Biologists.

DNR presented data from the past ten years showing the ebb and flow of steelhead populations to the NRC board, Commissioner Nyberg excluded, he had prior engagement. Guides and anglers have shot at data from DNR saying it is outdated and they need to get better information. The guides looked at their records and it shows a significant drop in catch in the past three years. Never mind Covid,  the afct that there are 3 times as many anglers on many of these rivers. Please dismiss the record high temperatures we have been noticing(on average) in the past few years coupled with record low precipitation and water levels. Also disregard the literal hundreds of cormorants and mergansers we see daily gorging on steelhead smolt. There is also an abundance of mature predatory fish- i.e. pike/walleye and smallmouth bass, who are having steelhead as a steady diet as they journey through the flooded river mouths on the way to Lake Michigan. Once in the Big Lake- its competition for available food sources, since zebra/quagga mussels have depleted most phytoplankton and the nomadic fish travel to Wisconsin shelf for a more abundant baitfish population. But we are an immediate gratification society. We want it now, put it in the microwave, 30 seconds, hot. I recall some of the most spectacular years steelheading in Rockford, late eighties we had a banner run, and then again in the mid 90’s. You could drift a nymph or an egg throw the pump hole and hook into 20 30 fish a day, maybe only land half a dozen, but those were the good ‘ol days. So much has changed. 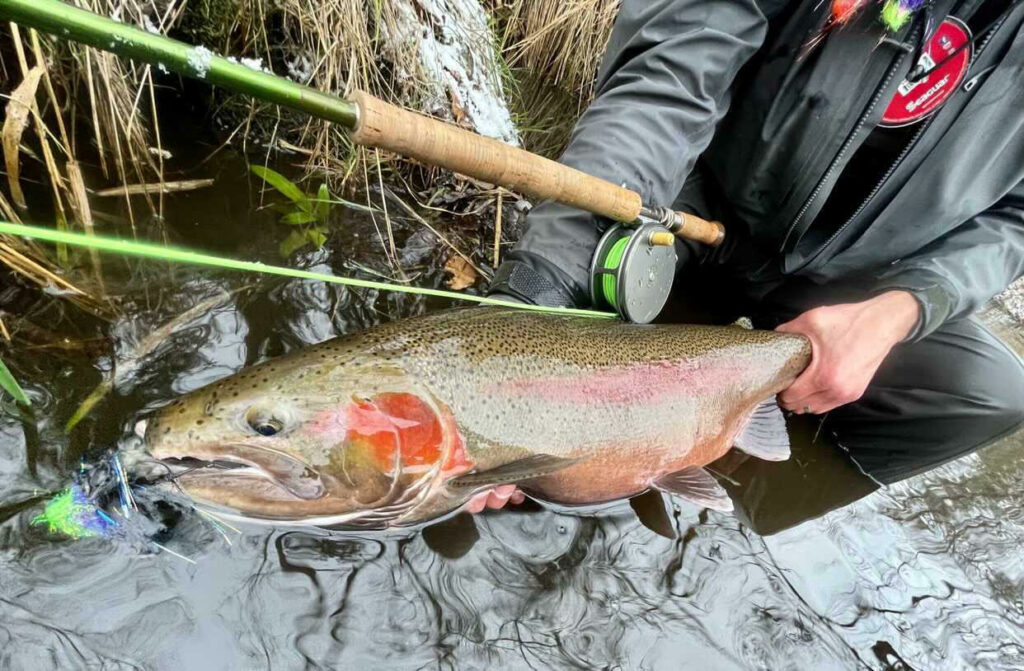 How do we actually fix it? Or do we?

There is an argument, Mother Nature has a way of balancing herself out. Some rivers have seen decent returns, the St. Joe, Grand River, Kalamazoo- but they don’t have nearly as many guides on those rivers. The Great Lakes are a huge ecosystem, and the balancing takes more than a year to level out. I am in no way saying there is an easy answer, and there certainly is a problem, but arm chair scientists never got us to the moon. What if we did nothing? And the rivers had a better return in two years? Brian Pitser from Northern Angler spoke at last NRC/DNR meeting and he expressed his concern the DNR did not harvest eggs from steelhead last year, obviously not the reason this fall/winter run has been lower, but his concern for return in three years has merit. What do we really need? We need better habitat, cold water bubblers at many of these dams, or fish ladders so steelhead can pass and spawn un-harassed, even better, remove these dams since they simply block passage for the migratory species you wish to fish for, instead of lining them up like cattle along a fence and pulling them out one at a time while they attempt to reproduce. There is way more pressure on these fish and every time I drive over the Muskegon, I cannot believe how low it is.

I have spoken with a few fly shops in the last month on my travels and there is a lot of concern. A drop in sales of fly rods, increase of centerpins in some areas, influx of other spawn (conventional)baggers in others. When the fishing became dismal on one local river, where many catch and keep anglers would frequent, all of a sudden they became more prevalent on less acceptable catch & kill waters. Fly guys are blaming bait guys, bait guys are blaming Charter boat captains, Charter boat guys only want Chinook, they in turn blame mismanagement of the resource. This may may not have started the fire, but it added to the fuel. Add in the the volatile climate social media has put us in, everyone is entitled and has ‘the only opinion‘- nobody is willing to compromise. Sure is nice when everyone is catching fish and all who are out enjoying a day on the water can actually enjoy Nature. Not so much.

This brings up another concern. So – potentially an angler who needs to fill a freezer can no longer do it on River (A) which was stocked for ‘put & take’, he now migrates east or west a few miles and finds River (C), which was wild/naturally reproducing and he proceeds to fill his daily bag limit. Has the NRC taken the adverse effect this amendment will have on other fisheries? Does this help or hurt the fishery overall? Seems like the armchair biologist would not want a naturally reproducing river to have increased pressure on it, since those genetics are exactly what we want in the rivers.

Here is a great article form Ed McCoy at Mangled Fly if you are looking for more input.

Angler take in the Great Lakes since 2013 show a huge increase in fish being caught, but not more stocking. This makes sense when you think about. There are more recreational angler and more guides than ten years ago, the hatcheries only produce so many fingerlings. You can’t put more fish in an aquarium if there isn’t enough food or room. The Great Lakes ecosystem is one giant aquarium- you can have twenty 1″ fish, or ten 2″ fish or five 4″ fish, that is what the ecosystem allows. Seems the other fish in the big pond have taken precedence over migratory rainbows. But many have forgot, ten years ago we were seeing more 7-9 pound fish and rarely double digit chrome, now that has changed, and having bigger healthier females will have higher fecundancy and more eggs.   I have long felt we need to keep our hatchery fish 3-4 months longer so they have a better viability in the wild, especially against the mergansers and walleye that await stocking trucks, but spring is optimum temperature for release so they are often dumped in at 6-7″, perfect bite size snacks.

By the time you read this, DNR and NRC will have had a second meeting, it will either pass or be tabled for 2022 discussion. If this is tabled- PLEASE write your DNR and NRC with your input.