A recent project begun by Ray Schmidt of Temple Fork Outfitters Great Lakes Region has received some attention by local fly anglers and tyers across the country. Ray, former owner of Schmidt Outfitters in Wellston, MI and innovator of many Great Lakes patterns such as Ray’s Rattlesnake and STS Bugger, thought it would be a wonderful winter project to dig into the history and document the development of many patterns that made our area famous and also highlight others that may have had their 15 seconds of fame. I reached out to Mr Schmidt to get a little inside scoop. Here is where this endeavor is headed…

“I was about 30 years outside of the Michigan fly development stage- 1930 thru 1950’s. I was lucky enough to be visiting my older brother in Grayling that lived next door to my Uncle Clarence Roberts.

The wonderment of law enforcement with the lure of fishing made a young lad want to be like his elders.
My love of tying flies soon followed. As years past and a world of fly-fishing opened for my career I wanted to preserve some of this stuff I knew, maybe some no one else knew.
I’ve chronicled flies for years both in text form and on our web sites.
After our sale of Schmidt Outfitters and retirement looming large, I wanted to put together  these historic patterns in one spot for the community to see and enjoy.
When our friend Chris Doyal volunteered to help put this together, well….bingo.“
Ray & Kate  -Double SS Outdoors 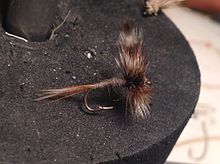 You can’t talk about fly tying and not mention the fly that put Mayfield Pond, near Traverse City,  Michigan, in nearly every fly box from here to Redding, California- The ADAMS. Whether you prefer the classic upwing spent style in Catskill fashion or the more popular parachute post, original muskrat gray body with Grizzly/Coachman hackle to current revisions in purple and iridescent sparkle, there is little doubt this mayfly pattern has fooled it’s fair share of trout from coat to coast. Midcurrent picked up on the project and many have now been tuned in. Join Ray as he talks & ties his way through the many flies our predecessors worked diligently to fool that big brown down on the millpond from decades ago. Who knows, a few of them may need to be tied up and swung into a current seam near you, they just might work.