To say that this past Spring was not your average transition from from Winter to Vernal Equinox might be an understatement. Early April snowmelt and above average temperatures had many of us hopeful for an early bloom, we even raked and were ready to bust out our gardening gloves. Then we were pummeled with over 24″ of white stuff mid April, just in time to slow the progress and reset our fishing calendars. I only mention the seasonal variations to set the stage for what we have been experiencing and prepare for the hatches, or sometimes, lack thereof.

We have had high water. Everywhere. Opening trout season on many small creeks was a blow out. Some rivers saw double and triple flows. Big water had flows that were steadily above the norm for close to a month, boat launches had water levels 12-18″ higher than normal. This did many things to the fish. It pushed them into new homes, displaced some small first year trout, and it also flushed out many rivers. The river systems have been flooded with food. Early season hatches still occurred, without the usual voracious symphony of hungry trout rising to emerging Hendricksons. They were, how shall we politely say- rather full and satiated. Not to mention pushed down to deeper waters, new holds and in some cases, entirely new sections of river. We still caught an occasional trout, just was not as high impact and exciting as one had dreamt during our winter months in captivity while tying flies and reading up on latest techniques. One certainly noticed how well fed those few fish we caught were. Brook trout on a couple rivers had fish that not only had shoulders for a 10″ fish, but also a belly so gorged on earthworms, they were literally spilling out of their mouth. This was noticed on multiple trips.

Then there was the warm up. Spring transitioned to summer with the smoothness of a bike race when the lead takes a spill on a tight turn and the rest can’t avoid tragedy. We saw river temperatures soar into the upper 60’s and even had 70º pledges in effect on Au Sable MIO water, in MAY. Record temperatures ago Memorial weekend across the state had many of us looking for the big bugs that would soon accompany. The drakes did not disappoint. They didn’t always fall, which is typical of the climate sensitive mayfly, but they arrived with great anticipation. Luckily, the evening lows began to drop and return rivers temperatures to fishable levels.

The Browns we have had in the net have been very healthy, well fed and after surviving another winter, eager for the next hatch. The Hexagenia limbata is prepped and ready to give us all she promises. A few things to consider- A) higher water levels and B) well fed/happy trout. What we have noticed in years passed, the higher water allows trout to move into shallow, reed filled water to feed on mayflies amid the vegetation. Be prepared to hear fish that are ‘Up in the weeds’ or fishing on peoples lawns. The fish you hear slurping, may be deeper in cover than you realize, scout your water early and know the length of your cast and target. Don’t under gun your opponent. The big bug game is 6 weight and 2X time. I am headed out tonight test the new TFO Axiom II 6weight and see how fat the fish are. 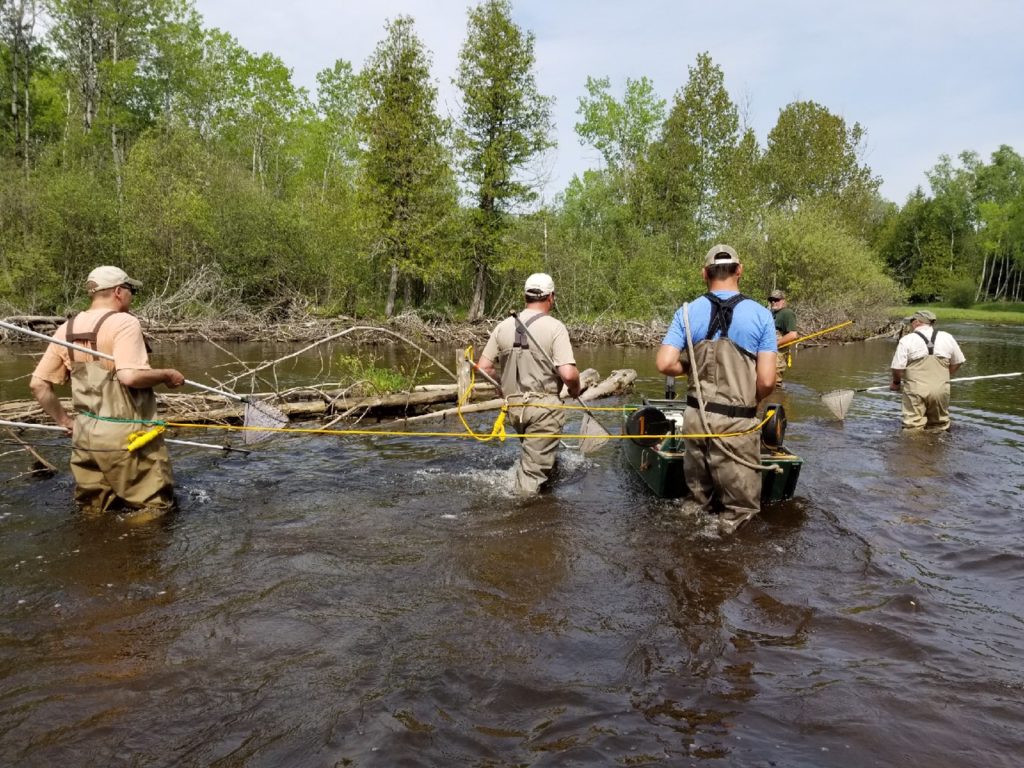 IN other news~ The North Branch Au Sable has had some concern. Thanks to a few local Grayling Guides, Jamie Clous and Joe Guild, they contacted the DNR with a serious inquiry as to where many of the usual brook trout have gone. After a few trips they not only didn’t catch the usual of eager spring feeding trout, they did not report seeing many fish either. Other guides in the area had the same concern. The folks at Fuller’s North Branch had a serious situation at the end of their dock. The DNR has come out and did two separate fish stockings, the first at Twin Bridges and at Dam Four revealed low numbers of fish. It was alarming only to find 3 fish at each locale when this river was on track to be one of the best brook trout fisheries in the state right behind the Black River in the PRC. Theories abound. Maybe the shockers were malfunctioning. Could the late spring have had a detrimental effect on first year trout? Did the heavy snow and rapid melt push fish further down stream? Has something happened to the Macro-invertebrate habitat? Shelf ice could have scraped out much of the river and displaced bugs? Did the first year trout not withstand the rapid snow melt? I called Neal from the DNR- in his words, “We are flabbergasted- we don’t know where the fish are but it is far too early to make any guesses. We are looking into this and taking this very serious.” The DEQ has been contacted and a second fish shock survey revealed similar results to the fish survey. 2 brown trout and one brook trout at Twin Bridges. Where have all the brook trout gone? After asking a couple local long-time fly tyers in town, the retort was ominous and dark. “I believe they got just what they were asking for…”

Josh at Gates has been heavily involved and if you have questions or concerns, please contact him. They have also teamed up with Vedavoo to raise funds with Anglers of the Au Sable in regards to the Grayling Fish Hatchery.

Hopefully you get out and have a Hexy June!!