The scent of freshly made lemon-blueberry scones intermingles with the brewing pot of hazelnut coffee, while locally made Italian sandwiches are packed way in the Yeti. There is no sleep at this crazy farm. Fear of missing my 4:30 am alarm is negated by our Dane/Labs culinary curiousity of eating my daughters sock and proceeding to hack it back up all night long… that’s OK, who can sleep when they are prepped to hunt swamp donkeys? We are going meet some old TU buddies and some new friends 2 hours away on the Trophy Waters of Mio on the Au Sable River.
After I pick up my fishing buddies, JP & Jake, we rendezvous at Glen’s in Mio, freshen up our coffee, buy some beef jerky and make our new acquaintances. Jeff and his Dad are from the Petoskey area, I worked with Jeff on various river projects before he spent some time in Alaska, later married and then moved to St. Louis. Jeff and I have been bouncing emails back and forth about my Adipose Flow and how much he liked them, he finally pulled the trigger and bought a decent little Hyde for floating the White River. Along with the Kenzies, we meet last year’s TU Volunteer of the Year recipient from the Gateway Chapter of Trout Unlimited~ Matt Tucker, a legend, not only in my mind, but also from the pages of Facebook and his Beating the Fat man on the OZark Chronicles, and his Mad Max to his BLASTER from Thunderdome fly tying companion~ Dan Ritter, who can tie a mean Hog Snare and a host of other sexy streamers. We chat it up and get our juices flowing even more as we single file line up through Bruce Graff’s Au Sable Angler as we each drop various and many dead presidents from Jackson and Grant, in order to have a few of Mike Schmidt’s well tied versions of Tommy Lynch’s Drunk & Disorderly flies. It has been a few years since Bob Linsenman sold the A-Frame across the street as a home base for my car spot and fly purchases, but Mr. Graff has a shop in the hotel that is open 24 hours and has the basic supplies for a day on the river. You won’t be able to come in and suit up an army in the latest G4’s from Simms, but you will find a small selection of rods/reels, fly line, tippet, flies and any other last minute supplies any angler might feel will improve their luck on their day.

waiting for car spots and warming up anchor lines.

It is early November, air temperature is in the upper twenties, the anchor line are stiff in the bottom of my boat. We are the only ones at the launch and the fog is slowly rises off the deep and dark flows of the majestic Au Sable River. As a guide, I always want my friends and clients in my boat to get hooked up with a fish or two during the day, especially a hawg. The excitement and anticipation as we leave shore, this is what makes this experience breathtaking, but awesome all at the same time.
We leapfrog boats for maybe a few  bends and turns, exchanging questionnaires as to what fly each guy is using and method or techniques. The hunt is on. In parts of Canada and the East Coast, a swamp donkey is a reference to Moose, in many of the rivers we fish, it is a moniker for a very large brown trout. We aren’t after the 20 incher, we’re looking for 25 and up. These fish require a certain sense of dedication and fishiness coupled with very large flies. We’re throwing many patterns including Kelly Galloup’s  Sex Dungeon, Circus Peanut, Boogiemen, & the T/A Bunker. Halfway into the day we take a break for lunch, still no monsters to speak of, but rubbery arms are tell-tale of persistence.

Tucker asked me a direct question “Hey Koz, are you still as involved in TU?” Kenzie and Ritter are deeply involved, talking intricacies of a well tied streamer and new materials in between scarfing down apples and sandwiches.
I paused for just a brief moment, reflecting on the past couple of years, “No, I haven’t been as involved as I once was”.

Which is not all entirely true. It made me think about it the rest of the day on the river. No, I’m not going to the quarterly meetings for Michigan Trout Unlimited Council, nor have I been in regular attendance for our Miller Van-Winkle Chapter meetings. But, I still continue to do the Salmon in the Classroom for the students at Sheridan Elementary, attend as many river cleanups as I can possibly do, macro-invertebrate stream monitoring, teach afterschool fly tying it Boyne City elementary, and a few other events. So I guess deep down inside I still am a reflection of Trout Unlimited, it is who I am and it is what I do. Every trip I take with clients going down the river I talk about the projects that we have done. River restoration, culvert removal, bridge replacement, habitat structure, shocking surveys, so many things I do, and because of my involvement and efforts, continue to work with various groups like CRA, Tip of the Mitt, Little Traverse Conservancy, and the DNR, because, I am TU. I wish I could take back my answer to Mr. Tucker, even though I’m not the president of the chapter I am still involved.
We exchanged other stories of various places, far-off lands, late night craziness and debauchery, days when we are younger and more foolish, but the anchors must come up and we must continue our search. It wasn’t long and we are into a few 15 inch fish on deceivers. Then we noticed a few fish breaking the surface and actually rising to bugs. I was fortunate to have my five weight in the boat, tied on a Blue-wing Olive and caught a healthy stocker. It was a beautiful day on the river. Meeting new friends, getting together with familiar faces and sharing a day on the river. 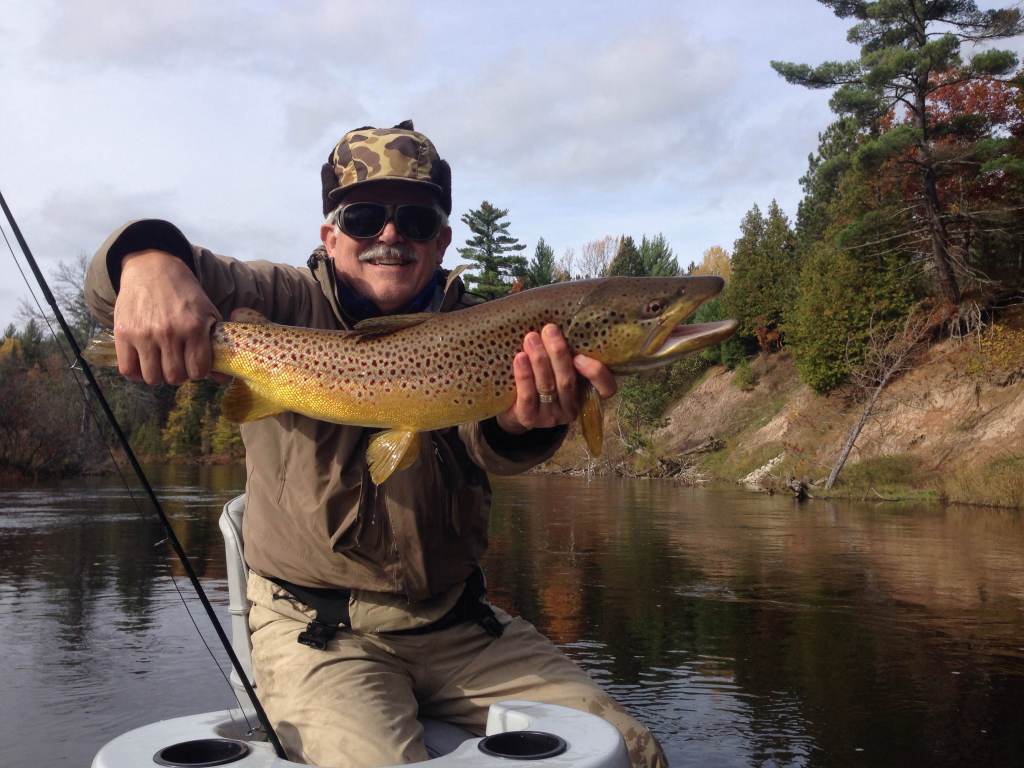 At the take-out, we learn that John Kenzie was the ‘Man of the Day’. His slow strip twitch was the winning combination that enticed a beautiful 27″ piggy. Until next time. 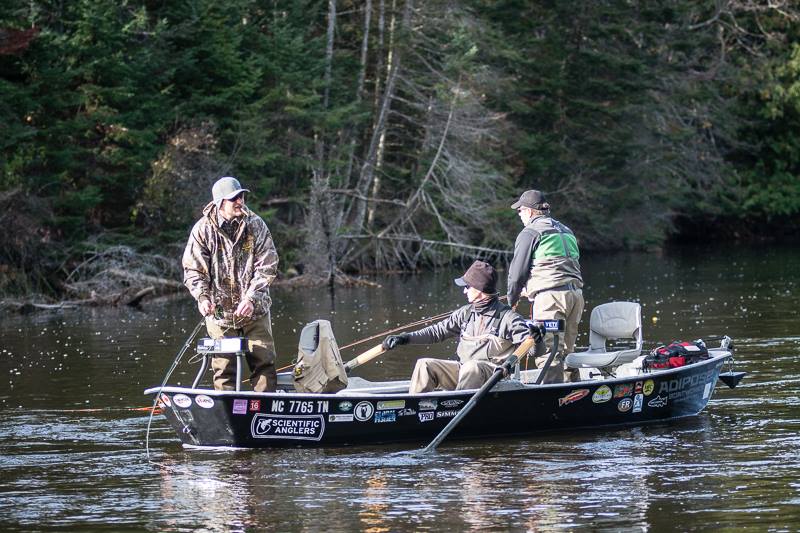 Working every inch of the river. Photo by M. Tucker

The crew from Missouri and the Michigan Boys. All searching for glory on the river…