It might be like meeting a newly divorced parents boyfriend. Or rather, your twenty year-old child, just broke up with former long term highly potential life-mate, and after months or years of hearing him/her drone on about “There’s no one for me…”
you are about to meet the ‘new’ boyfriend/girlfriend. All through dinner, course after painful course, you struggle to maintain small talk. Being ever so careful not to bring up the ex, nor times spent doing remarkable and exciting things like bungee jumping in New Zealand, sky diving in Montana or para sailing in the Bahamas together. You really want this new thing to happen for your son or daughter, but deep inside, you too, feel something missing.
It’s kinda like that, but not really, all at the same time. Call me crazy, bipolar, insane, what you will, but I am almost getting “That ol’ feeling” again. You see, I took one of our cooks from Cafe Sante on the river yesterday, we have been trying for some time to get out on the water. AJ has a RIVER MONSTER quest and wanted to learn the way of the fly. I quickly explain that this time of the year isn’t really ‘Fly Fishing’. We were swinging Grease Stains and Large Clousers pre- sunrise to entice rolling salmon at the mouth of the river to strike. After ten or so other boats encroached our space, I decided to take our game to the skinny water and drift clown egg flies through some of the heavily wooded holes upstream. 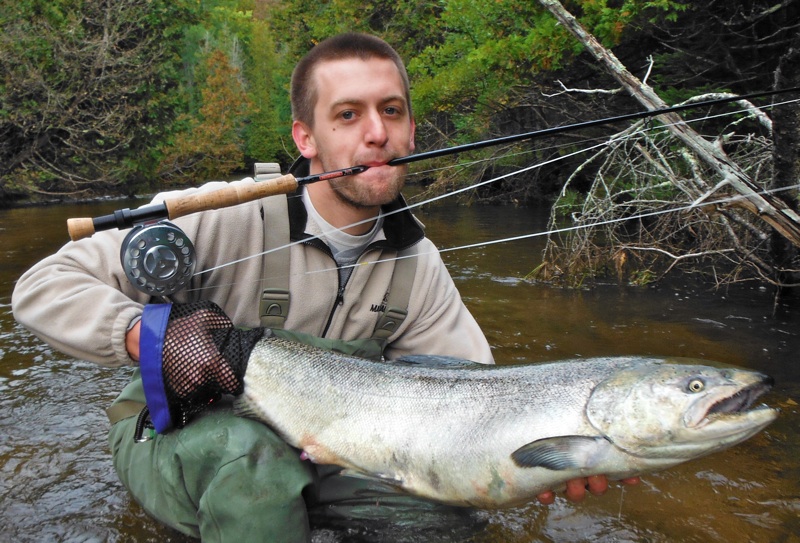 First Salmon on the Fly for AJ

Surprisingly, we had a few trout come out and snack on our Croque Madame offerings and actually hook up numerous times with the twenty pound intruders of the trout domain. After watching AJ hold one of the massive fish, I felt that feeling I had when I had my first salmon. Such awesome sheer power. An animal that is driven by one mere purpose, and the forces that propel a massive beast into shallow water of the unknown are remarkable to say the least.
Salmon fishing is easy. Before you jump on me for that, allow me to clarify. The fishing is easy, albeit the drift, the hook up, the following run that ensues, not busting up your knuckles as 100 yards of line and backing scream off your reel, not tripping up on the submerged woody debris in the river as you chase your quarry upstream, playing a twenty pound fish in tight & heavily wooded corridor of a river, and eventually getting a river monster to hand are where some talent is required. Seeing the ear to ear grin on AJ makes it worth all the lost flies and re-tying dozens of clinch knots. When my brother and I were younger, I vividly recall hitting the river with Dad and a jar of fresh tied spawn sack and our Zebco 202. We would carefully weave our snelled hooks through the nylon-like mesh egg sacks and heave them into the middle of the Grand River. Our technique and setup was more suitable for catfish or carp. Thankfully, we never caught a salmon in those early days, it would have shredded all components of that introductory rod and reel combo in a heartbeat. It wasn’t until years later when I had the inclination and proper direction to fish the swirling pools at the foot of the Sixth Street Dam to properly catch my first salmon on the fly. Hundreds of salmon later, and many years not specifically pursuing the often times decomposing anadromous cadavers, I felt that energetic connection to a animal of pure force as I watched a legit 30# kyped male tail-walk up stream faster than Da’Rel Scott can run the 40 dash. It felt good and it felt wrong all at the same time. Have secretly wished I had been doing this all along? 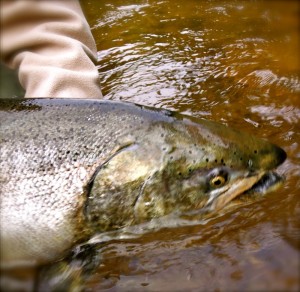 Have my dry fly ways eluded me to purer waters? I highly doubt it. I am still hunting big browns at night with furry rodents and jumping beaver dams for brook trout with Lime Trude’s, but right now I have to go tie a few dozen Lemon Parade and Clown Eggs for my box. My recommendation is to take someone who has yet to catch a fish of this magnitude out on one of our beautiful rivers and show them how majestic this time of the year can be.