“The biggest contradiction I have witnessed in my relative few decades on the planet is simple. It is HOW we are raised to share and protect what we love and treasure. Some men show their love and affection with fists and scars, hence the women in their youth came to expect and translate THAT as affection, others have been softer and more caring, considerate, unselfish and compassionate with all things God has created. Oh shit; brought the three letter G word in, now its gonna get all ‘Amish Mafia-Buggy Freaky’; not really, it’s OK. I started to get off track. I see and know guys who will seriously tape you up and prevent you from sharing the bend of water if you ever post a picture of a nice fish from said river. Never mind, they are not members of TU, nor do they ever show up for a river clean-up, help with a seeding effort, spread the good word of conservation to the youth of America to become tomorrow’s conservation stewards. Because really, they don’t want any more people fishing, they feel threatened they might find ‘their’ sacred honey hole. Never mind the fact there are apps for every body of water in the continental US and eventually will be found with conventional methods, such as a DeLorme Map. And, if you ask them to show you their photo album of fishing adventures from the sixties to today, they will gladly show off their plaque of machiasmo, some kind of badge of honor they were properly shown how to slay and gut thirty 20+” Cuttbrownbow Trout that may never have a chance to pass on their genetic make-up for a future generation to enjoy…. I am an advocate for selective harvest, don’t get me wrong, but when the same person who verbalizes all the wrong things TU is doing for a river, how dropping trees and armoring banks is ruining the fishing in their favorite holes, is the same one who for three or four decades brought home every fish that ever winked at whatever morsel of worm or spawn bag at the end of his line complains how the river just isn’t as good as it was thirty years ago, the old adage ‘You shoulda been here back when…’ comes to mind.” ~

The quote from above was a momentary reaction to what I had read from many of the other posts in regard to an old and defunct conclave where a group of men sit around and reminisce of days gone bye. It is also not directed at anyone in particular, but merely the mentality of genaral large populus of anglers who seem to find it better to place the blame elsewhere, rather than looking at more immediate and seemingly obvious malpractice. This is the continuation of a multi-part conversation that was started late last year and has recently been resparked and I can not maintain my silence.

from Matt Tucker at The Ozark Chronicles~~>> 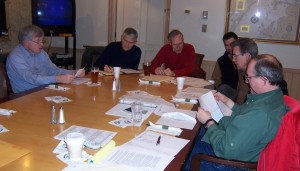 Many valid points are brought up by all these fellow anglers from across the Country. I have only a few points to bring up on the Northern Point of View. I lived in a fairly decent sized city for most of my life, and even though I was a member of Trout Unlimited in that area, it seemed too large of a group and I, too young of an individual to take part nor make any difference. After moving up North, and finally locating the meeting of a near defunct Miller-Van Winkle Chapter of Trout Unlimited, I stood up and said that I would gladly take the helm and captain this ship back to its former glory. Not considering what I was getting myself into, a group of mostly men who were at or past retirement, spending the colder months in warmer latitudes, because they had already served their duty. They had done their time, and slowly, they let go of the reins. It was a great opportunity for me, not only a learning development, but also growth in maturity and responsibility. This was on my shoulders. How can I revitalize a conservation chapter in a highly tourist area with a downward economy? It didn’t matter, it had to happen and work was to be done. We don’t have a glory river like the famed Au Sable or its sister river the Manistee, but what we do have is precious coldwater resource that needed attention to be brought back to a once famed ‘better day’- as it once was when the chapter had done so much work in the seventies and early eighties. Between State Council meetings, various watershed planning committees, and local Chapter planning events, I made the proper connections, met the respected elders who already knew the most direct route to put ideas into action, in short, I had to put in my time and get to know those in-the-know. 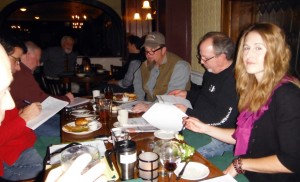 The TU board of the future~

The look and face of the Board has changed, focus isn’t so much on ripping out Beaver dams that will be re-built a weekend later by a very diligent semi-aquatic rodent of the Castor family. Instead, we are working to repair habitat and rebuild the river from the ground up. Cooperating with many non-profit groups, local and state agencies, (CRA, DNR, Tip of the Mitt Watershed Council, Huron Pines, FWS, Freshwater Future, American Rivers, the list goes on…) who have similar interests and a larger donor base, so that we as a whole can accomplish what a small group alone might not. After much introspection, I have come to the conclusion that I fear in a few short decades, I too will be the thinned gray haired elder who opines about ‘back when’ we tried to generate new growth in our chapter but couldn’t pry the youth away from the X-Box or Wii and the glory days of better fishing that seemingly doesn’t exist.

I hear the plight of many groups near larger urban areas who annually raise 20-30K in fundraising but have little resources to put their dollars towards. While we are fortunate to net a couple of thousand dollars at our annual banquet and have a few watersheds that vie for attention. We are aiming for the balance, somewhere between the muscle of youth and the gentile wise check writers, we need to find our common ground. We need to teach the next generation the value of the cold, clean water that seeps from many springs along the valley, and the the importance of not selling it for the land rights for mining.

Slowly, I see a change. I see the future river stewards cleaning up trash along more rivers. I see more public awareness in the threat of invasive species. I see landowners allowing more vegetative growth along the beachfront cottage on Lake Charlevoix for establishing a Green Belt. I see Recycling on a monumental level in multiple generations, instead of throwing those non-refundable glass bottles into the lake because we won’t see it. I see less fertilizer on lawns and more rain-barrels under eaves for watering gardens. I see a Cold-water Conservation group that gets together on the bank of a river for a cook-out with no monetary agenda, just to enjoy the work they have done and to spread awareness. 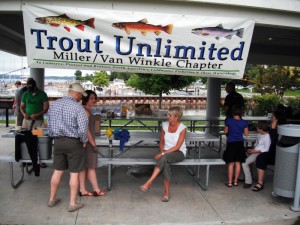