Sometimes, you just need to sit in the dark and wait. There is something about solitude in the dark that allows one to clear their mind, focus on the task at hand and contemplate the bigger picture. No apologies for not putting finger to mouse and getting more writing out to you, I have much admiration for the bloggers who seem to get it done amid jobs, family and household duties~ my wife claims we haven’t had more than twenty minutes together in over a month. I am penning this in between making breakfast, watering my now defunct lawn, and packing a lunch picnic for Simone and I at the beach. It is going to be near 90 again today, a scorching dry summer for much of the country, especially the midwest. It has been good for the restaurant and tourism. I can’t yet say the same for trout fishing nor the fly shop> water levels are low and temps are high. My canoe is always ‘At the Ready’ atop my Jeep in case (when) I get out of work at midnight I might have more energy to put in Lake Charlevoix and toss hard bodied Finnish streamers for walleye or voracious bronzebacks, but that fleeting moment is often overcompensated by my seven year olds tenacity for rising at the crack of dawn to plan our agenda for the day. Kudos to those who get it done every day and every week (you know who you are). 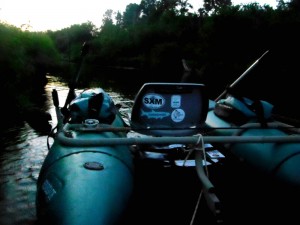 Waiting for the Hex

A little over a month ago, all the stars were aligned and barometer was just right, I had my Golden Opportunity to sneak out for a some much anticipated Hex time. Just prior to the twilight hours of dusk, I had my one-man pontoon ready on the fishcar and headed to the river where all the other guides head to after their hex trips are closing down. Upon reaching the rivers edge, I said hello to some fellas that were down stream in a Hyde and asked the usual non invasive questions. How has the Fishing been? Any big bugs yet? Do you mind if I go upstream? They were cool and complacent not giving away too much, but not secretive in any way either. I made my way up and across the river a few bends so I might enjoy a decent stretch to myself. Nice rolling boils painted a midnight blue smudge across the rivers surface, intermittent logs and driftwood from the turn of the century interrupted the flow of the rivers natural tendencies. This is a great spot, open tall grass meadow on one bank and looming willow trees on the opposite, despite the echoing screams from some kids playing in a pool further upstream, this is a slice of Eden.
As I go through my boxes of spinners and Duns, some from Ray in East Jordan and a few from T. Jaissle, I can’t help but get giddy inside thinking about the dynamics of this water and resident trout that will soon show their feeding lanes. My mind wanders to conversations had earlier at Boyne Outfitters during the week. I realize everyone has opinions, and we can’t carry or stock every make of reel or rod, but certain topics reside in the corner of my mind today. We were told we were ‘Pimpin’ out the River’- by guiding. We were essentially selling out the waters I have worked many years to protect and improve. I am befuddled and always will be by this logic. How can I~ one who has always been an advocate for cold, clean and clear rivers; be a sellout? I never made any qualms growing up that THIS was my lifelong dream- to be a part of a fly shop in northern Michigan, surrounded by like minded fellows sipping French Roast Java and chatting up last nights hatch on River X. Have I been unclear? Have my years of donating trips to non-profit groups like the Women’s Resource Center, Habitat for Humanity and the Crooked Tree Arts Center with the hope of introducing new individuals to our lifelong addiction been for naught? But was I pimping-out then as well? Maybe. I guess for years I have been a pimp> if pimpin’ means showing other individuals how to properly present a fly, land a fish and release it back to its home so that another may enjoy its fight and verve, well, maybe I am pimpin’. Hmmm. We all won’t be on the same page, nor see eye to eye. Some people have freezers full of fish they have caught, and although I advocate C&R, Selective Harvest and eating a fish or two now and then is good for the stream. I find it hard to swallow certain people who complain that a river is dead or not as good as it used to be when they have pilfered every fish in it for over twenty years without a care or thought of its potential in the future if they were to release a few more fish. It’s funny that I work two jobs, maintain a home and family, try to keep the balance and such a trivial thing as this would play on and on in my head. Must be the server in me that wants to please everyone all the time, realization of that fallacy is a hard one to swallow as well. I hope for those that I have shared quality time on the water with have those memories and treasure them as much as I. And those who learned a secret trick or two, I hope that you pass those along to someone who might be so deserving, because that is why I am a pimp’- I love sharing my passion for the rivers and passing it on to the next generation. After I have these moments of clarity, it is nice to jot them down and let them go, released back into the stream along with the few fatty fifteen inch browns that fell to Mr Jaissle’s spent wing Hex> thank you Thom. Sometimes, we need a quiet night on the stream to reflect and ponder.
On a completely different level of concern happened a few short weeks later. Ethan, Zach and myself had the even more 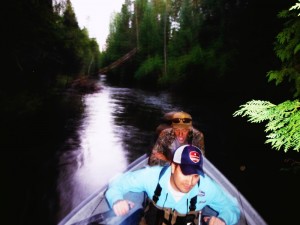 Zach and Ethan pushing down the river~

auspicious occasion of a night off together and the highly anticipated knowledge that the big event hadn’t really happened quite yet, or it had, but was definitely going through short cycles due to the extremely early warm temperatures and above normal heat. Call it a Busman’s Holiday, call it buddies out for the night, call it what you will, but we have been out many consecutive nights individually and hadn’t quite gotten into them. We launched Ethan’s Hyde around 7:30, made our way casually down the river snacking on peanut-butter Snickers and coffee. Admiring wonderful little hideouts for monster trout while noticing a few little dimples on the water and some early evening mayfly activity, we chatted about the health and vitality of this once de-forested river valley and how miraculous nature can be when left alone and protected. Zach has taken on a personal oath to catch all three species of N. Michigan trout on his bamboo- and attempt to have them all twenty inches or better. It may happen. Good luck on the brook trout portion of that equation, I hope I am there when it happens, if someone can do it, it is him. I recall meeting him camped out on another river two summers prior, mousing maniac, waiting for the hex. After Mr Sheets was done ribbing him about not being a TU member- because he was unaware it its initiation and hazing practices- we became friends at multiple MVWTU sponsored Fly Tying Nights. This kid can grab his sleeping bag and head to one of many State Forests in our area and not be seen for days, he has taken me to places in the heart of some woods only Harry Potter fans read about, and therein lie the monster trout he seeks. A little jealous, yes. He has the youth and freedom to pursue the behemoth trout we dream about. I only wish I was as focused as he at his age(21).
The river Turned On for us that night. We could easily see dozens of fish slurping the surface against the twilight, trick was to wait out the big guys. 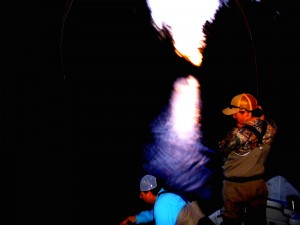 Zach into the first of many for the night~

Bugs were swarming upstream past us like massive X-Wing Fighters headed to attack the DEATH STAR. It was ON! I had first shot. I can noticeably hear an audible slurping pig tucked tight up against the right bank near a tuft of tall reeds. I lay my line down, zig-zag out a nice little mend, slurp, STRIKE> miss.
Damn. Lay down a better line, perfect mend, in the lane, SLURP> strip~ MISS AGAIN! Damnit!!
WTF- really? Seriously?!!?~ all play in my medulla oblongata- this is pretty pathetic, why can’t you connect? What is more unnerving are the two guys behind me, watching, waiting, anticipating (Carly Simon slipped in there-sorry). Why aren’t they jabbing me? Where are the heckles? Whenever you through down consecutive bad lines or miss great feeds like that I should be hearing from the likes of Statler and Waldorf from the box seats. I think that uneasiness weighs on us all when we have an audience. On the third strike set, my line comes fumbling directly at me, concentrically wrapping itself around my 5wt Boron II. SHIT~
“Next Up, I have to untangle this mess.”
“Zach, you try.”
By now there are more piggy’s with the feed bag on, all across the river, as far as we can see and right next to the boat. Zach lofts his line a few feet ahead of a big piggy> strip/set and he is on!! Nice healthy 17″ er.
Ethan was up next and got into a nice one as well. By the end of the evening hatch, we all had two decent fish between 17-19″. Nothing for the record books, but a great night for each of us. Time to get wet. See you on the water~ 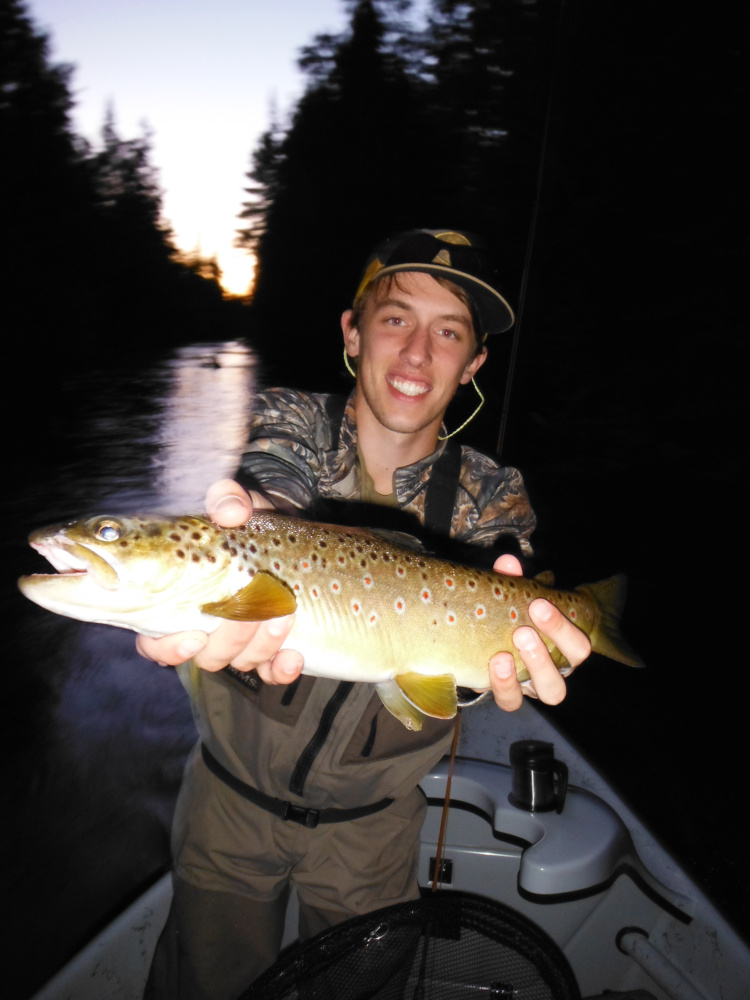