Camp Ginger Quill was hardly what you would expect of a fishing camp. It was somewhat rustic, as fishing was the primary activity, but it was also quite elegant. The pressure of the outside world ended when we started down the hill approaching the Ginger Quill entrance. It wasn’t a conscious thing. It was like walking through a magical gate. The smells, the sounds and the unbelievable beauty simply overpower you from the minute you arrive. 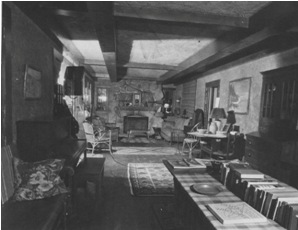 For us, as children, the long ride from Bay City was almost over when we heard the gravel strike the underside of the car near Roscommon. (I-75 had not yet been built.) Our father, Fred, would make a short stop at Jack’s Rod and Fly Shop to pick up flies and leaders. We would always stop on the bridge over the South Branch to say hello to the Au Sable. From then on we would search for glimpse of a deer and for the small Camp Ginger Quill signs nailed to trees or posts, along with what seemed like a hundred other signs, indicating when we should turn. Once we were on the Ginger Quill road and starting down the hill, we would honk our car horn announcing our arrival. Grandma and Grandpa Smith would welcome us on the back lawn, usually just as the sun was going down. We children would pile out of the car and dash down the sidewalk to the river. The river held great excitement for us. It was like seeing our best friend after a long absence. Our parents had to drag us off the dock.

We usually slept in bunk beds right by the rear entry door. We all remember rolling over and scratching our arms on the rough stucco walls. On a typical day the grandchildren would awaken when the caretakers brought in fresh firewood at 6 A.M. The footsteps up the back steps, the creaking of the screen door spring, and the closing of the door were enough to wake us. We were up quickly and would run along a direct path behind the tackle room, through the woods, and up to the “Dining Cabin” for breakfast. Zoe Borchers’ Au Sable River Pancakes (balls of pancake batter, deep fried and covered with honey butter) were our favorite breakfast. Our ages were compatible with the caretaker’s two children, Bonnie and Butch Borchers, and we got along very well. We would stay occupied at the “Dining Cabin” until the adults were up and ready for breakfast. They would have coffee at the “Main Cabin” but, when ready, would call the “Dining Cabin” on a private phone system, to indicate they were on their way down for breakfast, stopping at the “Boys’ Cabin” to pick up any guests who might be there. While the adults were at breakfast the “Main Cabin” was being cleaned and the beds made or changed.

Lunch was packed for those going out fishing with a guide. We will always remember Zoe’s wonderful cookies. Lunch for the others was normally served at the “Main Cabin” and was usually very light. I remember having fruit, sandwiches and cold soup on the front porch looking out at the river.

Dinnertime was usually set ahead of time. As evening approached and the fishermen returned, naps were over and everyone was cleaned up, the adults would relax on the front porch with a drink or two before dinner. A large cast bell would ring at the “Dining Cabin” indicating dinner was ready. We would all stroll up for dinner. Meals would rival those served in the very best restaurants. As a child all I can remember is the Baked Alaska, but we ate many wonderful things. I especially remember the miniature canoe and hand carved duck decoys that decorated the dining room. We would also watch deer graze in the meadow by the gazebo. It was normally dark when we walked back after dinner but the walkway was lighted. The evenings were peaceful.

The living room seemed to glow even when there was no fire. When the sun went down there was little to do but play cards, read or talk around the blazing fire. We would open the upper doors to the porch and could hear the river over the crackling fire. Our grandfather loved to play cards, and canasta or cribbage was his games of choice. He was very competitive, but I think he let us win. I remember being introduced to Christopher Robin and Winnie the Pooh and Alice in Wonderland while trying to stay awake on the down sofa. If you happened to be captured by that sofa, it would envelop you and put you to sleep in minutes. Television made a very late appearance at CGQ but was normally only used to watch an occasional Tigers game. Even the telephone was located outside in the tackle room.

Henry B. Smith Jr. owned several companies and was on the board of directors of the bank. To us, however, he was just Grandpa. He was a kind and gentle man who was very generous to family. He loved the Au Sable and he loved trout fishing so Ginger Quill was very much an extension of his personality. He always seemed happiest there. We often played cards together and watched Tigers games. He collected stamps and coins and showed some talent as an artist. He delighted in sharing his interests with us.

Our Grandmother, a very beautiful and elegant woman, would read to us and play and sing to us at the piano. She loved the woods and spent most of her time nurturing the garden she planted around the “Main Cabin.” She created a nature trail and filled it with Michigan’s most beautiful wild flowers. She also created a tree farm and planted thousands of trees throughout our property, much of which was seen only by her. She loved taking us through the woods to teach us about her trees, her flowers and her birds. She was a magnificent woman and much of the magic that is Camp Ginger Quill came directly from her. She also holds the Ginger Quill fishing record; a 24-3/4 inch brown caught just below the “Main Cabin.” The men who fish there never quite got over the fact she beat them and she was always there to remind them.

The Hottentots, a group of men who gathered at Ginger Quill on the 1st of May for the opening of trout season, held a one-day fishing contest to see who can catch the longest fish. The winner gets his name on a loving cup and gets to keep the cup for that year. He is also responsible for choosing the invitations for the next year. The invitations normally have the Ginger Quill logo, the date and the words “Happy Hottentots.”

The gathering of the Hottentots was quite a party. Although trout fishing was the number one priority, the Hottentots knew how to enjoy themselves. They all had a small paddle they would bang on the dining table to the beat of their song, “We are the Happy Hottentots,” bang, bang, bang, bang, etc. Missing a beat of the song could result in an unwanted swim in the river. It was usually a little difficult for the younger generation to be accepted as members, as the fathers weren’t sure they wanted their sons to see them having that much fun. The transitions took place, however, and the Hottentots remain active today although somewhat subdued. Catch and Release has forced them to fish below Wakeley’s Bridge or on the North Branch.

Camp Ginger Quill is indeed a very special place. It has affected everyone who has ever been touched by its spell. We in the Smith Family will always miss CGQ and treasure every moment we ever spent there. We are all pleased that Ginger Quill is still touching people’s lives.