Captain Todd Fuller is a fly fishing guide and outfitter who divides his time between playing a major role in his extended family’s Northern Michigan business — Fuller’s North Branch Outing Club in Lovells — and his Orlando-based saltwater guiding business, Fuller’s Angling Adventures, Inc. As you will discover in the interview below, Captain Todd spends a great deal of time moving between his two lives throughout the year.

T|N|T: Todd, tell us about how you came to fly angling? What is your sporting background like, and when and where did you start to fish with a fly rod?

T|F: I started fly fishing at the age of eight years old with my Dad, Uncle, and Grandfather. Mostly on lakes and really small streams near our family cottage in Lewiston, Michigan. I have fished and hunted all my life and I knew someday that this passion would be my lifestyle.

T|N|T: People know about Fuller’s North Branch Outing Club up in Lovells – how did that get started, and what was your role in it? I’m met your mother, too, at the club – are your folks involved in that project?

T|F: Being in the Lewiston-Lovells area on a regular basis, Labor Day Weekend 1996 we saw the old Douglas Hotel, North Branch Outing Club, was for sale. Our family went and looked at it and our wheels were spinning.  Two weeks later we were the proud owners of this historic fly fishing destination.  My Dad (Darrell), Mom (Judy), Sister (Kim Fuller Lewis), and I were all involved in the two-year process of getting the Lodge restored and open again to fly anglers. My Mom currently runs the B&B Lodging and I run the Fly Fishing Guide Service and Full Service Fly Shop with our very talented staff.

T|N|T: I’ve attended the Michigan Fly Fishing Festival a few times. Could you talk a little about how that got started and what you’re trying to do with the festival at this point?

T|F: The Michigan Fly Fishing Festival was created to help raise money for river restoration in our area and another reason for all fly anglers to head north. Our goal is to raise as much money as we can for Huron Pines RC&D. This organization is responsible for all the wonderful work that has taken place on the Au Sable and other rivers in Northeastern Michigan. I had this Festival vision in my head for a while and the time was right to do it. This year will be the 3rd annual Michigan Fly Fishing Festival and we are expecting a much bigger crowd this year. We will have all the details on our website very soon.

T|F: I will always be a Michigander at heart and my first love is chasing rising trout on the North Branch for sure. However the saltwater fly fishing game has really gotten in my blood over the past twelve years.

T|N|T: You do a great deal of guiding in both Florida and in Michigan – tell us a little about your clients and about your life as guide. What brought you to guiding and what do you enjoy most about it? What are some of the frustrations, too? 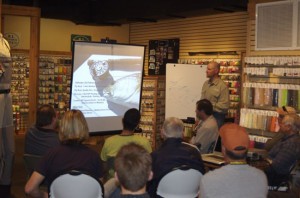 T|F: I have been blessed for sure. To be able to do what you love and make a living doing it is everyone’s dream. It would not be possible if it were not for my very understanding and supportive wife. From May to October I fly every other week from the flats of Mosquito Lagoon to the beautiful waters of the Au Sable River system. Talk about keeping things fresh and new — the burnout factor that some guides experience is not in my future for sure. I fish with clients from all over the world and a lot of them fish with me in both of the watersheds on which I guide. For sure the best part of guiding is the people I get to meet and become friends with over time. Quite honestly, I do not get frustrated on the job. It is all about having a great time on the water and delivering what the client wants out of the day — understanding that point up front is the key to a successful day on the water for me and the angler I am guiding.

T|N|T: Intermediate-level anglers usually want to take their casting to the next level. I understand it is always hard to give generic advice, but what do think the average angler should be doing to improve their casting game?

T|F: Casting, casting, and more casting — the correct technique, that is. I work with lots of folks on improving their casting, be it short casts for rising trout or long casts for tailing Redfish. Perfecting loop control and learning the double haul is a must to take you to the next level.

T|N|T: I’ve seen pictures of you fishing out of an Au Sable riverboat. I fish out of my Ro Skiff on the lower Au Sable all the time, but have limited experience in traditional Au Sable boats – could you talk a little about them and about how they perform?

T|F: Fishing out of an Au Sable riverboat is a very unique experience and one of the best ways to catch fish on the dry fly. It is pure tradition here on the Au Sable River. They were originally used in the logging industry to bring supplies up and down the river to the lumber camps. In the late 1800’s a young man named Rube Babbitt took one of the riverboats, put a front seat and live well on it, and started guiding fly anglers for Grayling. Guides have been using the Au Sable riverboats for fly anglers ever since.

This watercraft is made from beautiful woods and is a sight to see one floating down the Au Sable. They float in mere inches of water and are very quiet as they slowly drift down the river. Guiding out of one of these boats is a real pleasure. It’s kind of like fly fishing out of a limo in true style and comfort. They accommodate two fly anglers very comfortably.

T|N|T: I’m not asking you to give away any big secrets, but tell us a little about the North Branch of the Au Sable … what makes it a special fishery for you? 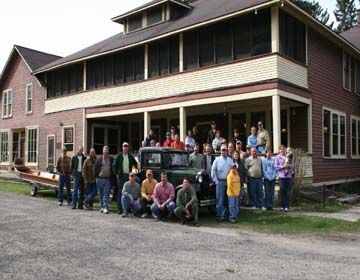 T|F: It is truly a fly fisher’s river — great fly hatches, longest stretch of  “Flies Only Water” on the Au Sable, and lots of wild trout eager to take a fly. The North Branch has plenty of public access points and yet still has large tracts of private land which makes it more difficult to access then the other branches of the Au Sable River. This means less people, no commercial canoe traffic, and solitude for our clients.  I caught my first trout on a dry fly on the North Branch and that is really what makes it special for me.

T|F: Eight years ago, when I started guiding full time, I had the option of staying in the cold and snow guiding winter steelhead or heading to the sun and warmth to chase fish on the saltwater flats. It was an easy decision, for sure.  I met my wife down in Florida and being a native Floridian, moving North was not in the cards for her. So, we live full-time just outside Orlando, Florida with our 2 ½ old daughter Madison.

T|N|T: When you’re in Michigan, and not on the North Branch, where do you like to fish?

T|F: I really enjoy fishing all of the Au Sable and Upper Manistee river system. I wish I had more time to fish on my own, but I usually just pop out in front of the Lodge for an evening fish to get my dose.

T|N|T: Tell us a little about the Florida fishery and what you find exciting about that aspect of your life. I’ve fished a little in the Keys and over in Pine Island Sound when I stay on Sanibel, but have limited experience in the eastern part of Central Florida. What should I expect?

T|F: As most of us Midwestern fly anglers do in the winter time, I was watching a episode of Flip Pallot’s “Walker’s Cay Chronicles” and they were fishing a place called Mosquito Lagoon and catching a lot of nice Redfish on the fly. At the time, I was doing quite a bit of business in Florida and happened to be going to Florida the following week. I got on the Internet, talked to a few guides, and booked a trip. That was the start of my addiction.

Just 45 minutes east of Orlando, Mosquito Lagoon is one of most unique saltwater estuaries in the South. With almost no tides and the same salinity as the ocean, it is the only place where Redfish live and spawn in the same waters. That equals BIG FISH on the shallow grass flats. Mosquito Lagoon is located in the Merritt Island National Wildlife Refuge and is one of most pristine estuaries you will find in the state. So the combination of the beautiful surroundings, and the fabulous sight fishing for Redfish, and it was an easy decision to call Mosquito Lagoon my home waters in the South.

T|N|T: When a Michigander travels to Florida to fish in the salt, what are some general things you want them to understand and expect? Setting aside good distance casting, what are some skills you think are underdeveloped in the typical Midwestern fly angler when they approach saltwater angling?

T|F: First of all, fly fishing in saltwater is a totally different game then chasing trout, salmon, or steelhead. Casting is important with freshwater fly fishing, but casting is THE game in the salt. More then distance, accuracy in delivering that fly quickly to a target is the key. I would much rather have an angler be able to cast a fly 40’ quickly and accurately then 80’ but off the mark. Move that distance to 60ft with that same level of accuracy and your chances to hook up in the salt go up ten-fold. Being able to double-haul is also a key element in saltwater fly fishing. This really increases your line speed and enables you to cast the fly in windy conditions. The bottomline is if you want to be a good fly fisher in the salt, you’ve got to put your time in. The good thing is, once you become an accomplished saltwater angler, your entire fly fishing game is taken to the next level.

Ed. If you’re not familiar with Fuller’s North Branch Outing Club, you should definitely have a look at their fantastic website, and Capt. Todd’s Florida guiding business is also online, and features some fantastic photography and a solid fishing report.