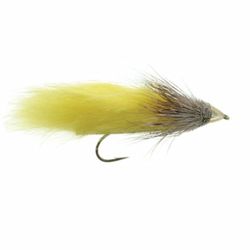 Ray Schmidt’s fly box is featured today at Midcurrent as part of their “Inside the Box Series.” Unsurprisingly, it is a box full of BIG streamer flies — the sort that are tied on BIG hooks to fool and catch BIG trout. Ray notes in the accompanying interview that he regularly fishes with a group of big streamer nuts, and of course his own personal fly designs are right outta that school, too.

If you’re unfamiliar with Midcurrent’s “Inside the Box” series, then it is worth looking at some of the other featured boxes, too. I’m particularly impressed with Craig Mathews‘ box, along with the box of Diana Rudolph and, though a bit predictable, that of writer and bonefish angler Carl Hiaasen.

At the end of the accompanying interview Hiaasen’s remarks that “Bonefish have been around for a couple of million years. Human beings are just blips on the screen for them. They’ll probably outlast us, despite the fact that we seem to be doing everything we can to destroy their habitat. Meanwhile, I’m going to catch as many as I can.””