More Bad News for the Great Lakes: If It Isn’t One Thing, It’s Another 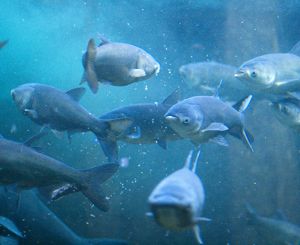 Asian Carp at the Shedd Aquarium

The Free Press reports today that Michigan Attorney General Mike Cox has filed a motion with the U.S. Supreme Court to reconsider its decision to keep open the Chicago-area shipping locks that separate the Mississippi basin from the Southern end of Lake Michigan. Cox’s argument is that elements of the government knew about the discovery of Asian carp genetic material in Lake Michigan three days before the high court’s ruling, but that this information was not made available to the court in time for their decision.

The latest bit of bad news, however, takes the form of word that researchers have found evidence of another sportfish-killer — viral hemorrhagic septicemia virus, or VHSV, in Lake Superior. Medill Reports in Chicago carries the story. The article states that, “the discovery means the disease is now documented in all of the Great Lakes and could be reaching epidemic proportions in Lake Michigan.”

“‘There’s a chance that this virus could cause traumatic mortalities,’ said Paul Bowser, professor of aquatic animal medicine and the study’s lead investigator. ‘In the very onset there will be a lot of hosts, and many [fish] are going to die, which is likely to have a severe environmental impact.’”

The virus is fairly easy to spread, which accounts for the rapidness with which it has moved from watershed-to-watershed. And because it is easy to spread, it is important for anglers and boat owners to take appropriate precautions against inadvertently assisting in spreading the virus to unaffected areas. Bowser adds that it is important to not “move fish from one body of water to another, and [to] wash your boats thoroughly after removing them from a lake … Everyone’s going to have to play a part in limiting the spread of this thing.”