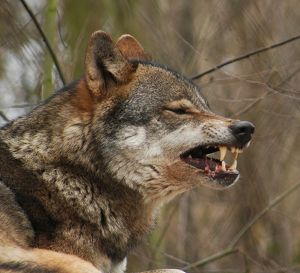 The Department of Natural Resources and Environment today announced it will conduct a survey in the northern Lower Peninsula Feb. 16 through March 12 to detect the presence of gray wolves in this area of the state.

Survey teams will be searching areas where the public reports observing a wolf or wolf tracks during the survey period. Priority will be placed on the most recent reports and reports with potential wolf evidence.

“The purpose of the survey is to both verify the presence of wolves where we have previously confirmed animals and to detect new occurrences in other areas,” said DNRE Wildlife Biologist Jennifer Kleitch. “Given the low probability of observing a wolf or tracks in the Lower Peninsula it’s helpful to have as many eyes looking as possible. That’s why public reports are important.”

The DNRE is asking the public to report wolf sightings that occur during the survey period to the Gaylord Operations Service Center at 989-732-3541, ext. 5901. Observation reports can also be submitted online year-round at www.michigan.gov/wolves. The Web site also contains identification information for wolves.

“It’s imperative that observations are reported in a timely manner so we can work with fresh evidence. If the public finds what appear to be wolf tracks, they should preserve the physical evidence and disturb it as little as possible or take a photo of the tracks with a ruler,” Kleitch said. “If someone has a photo or video of a wolf in the Lower Peninsula, we’re interested in that as well.”

Wolves began naturally returning to Michigan’s Upper Peninsula via Canada and Wisconsin in the early 1990s. Since that time populations have increased and continue to expand their range. Evidence of range expansion into the Lower Peninsula came when a gray wolf was accidentally killed in Presque Isle County in 2004. More recently, the DNRE verified two wolf observations in 2009 in the northern Lower Peninsula as a result of a video and trail camera photo taken by Michigan citizens.

The DNRE is partnering in this survey effort with USDA Wildlife Services, the Little Traverse Bay Bands of Odawa Indians, Grand Traverse Band of Ottawa and Chippewa Indians, and Central Michigan University.