Note: Although the following is getting to be “old news” it is also a wonderful biography of Rusty Gates written by his friend Josh Greenberg. It is worth sharing, along with the note that a celebration of Rusty’s life and work is being planned for this spring, and more details will appear here as soon as they are available.

Celebrated conservationist and fly-fisherman Calvin “Rusty” Gates Jr. died on December 19, 2009 at his home on the banks of the Au Sable River in Grayling, Michigan after a lengthy battle with lung cancer. He was 54 years old. Gates served as president of the Anglers of the Au Sable from its inception in 1987 until 2009. During this time he and his organization won several landmark legal cases in coldwater conservation.

“Rusty was a true treasure,” said Rebecca Humphries, Director of the Michigan Department of Natural Resources. “He loved the Holy Waters of the Au Sable and shared that love with countless individuals. He taught us that it is our duty to respect the resource and to protect it. His love of the river lives on in all of us. I have been truly blessed to know Rusty.” 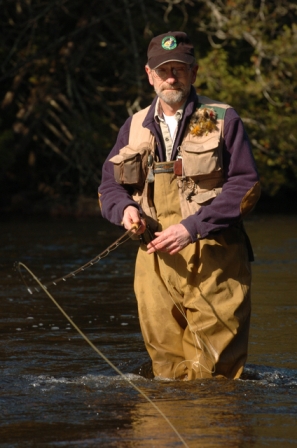 Rusty doing what he loved best

Gates was the proprietor of Gates Au Sable Lodge, and an iconic fly-fishing personality. Rusty’s father Cal Gates Sr. moved his family to Grayling in 1970 and, along with his wife Mary, purchased the lodge on the banks of the Au Sable River. Cal Sr. had taught high school music, and Rusty played trombone in high school. But soon his passion for fly-fishing occupied most of his time. He began tying flies professionally at the age of 17, as well as guiding. At first Gates’ flies were sold in the corner of the restaurant at the lodge, but soon demand was great enough that the Gates family added a full-service fly-shop to the lodge. Eventually Rusty bought the lodge and operated it with his wife Julie, who ran the restaurant.

“Of all the strong conservationists in our world, Rusty was one of the toughest. He was tireless, and he was like a missile in his precision and deadly accuracy. Yet he never, ever, wanted credit for anything-just for the various groups he worked with, especially the Anglers of the Au Sable,” said Tom Rosenbauer, winner of the 2001 National Outdoor Book Award, and Marketing Director for the Orvis Company.

Gates Lodge is a place where thousands of anglers gather annually during fly fishing season from April through autumn. Rusty and Julie could be found there at all hours, tending to the smallest details of fly tying and gourmet cooking. With classical music playing in the background, the fly shop buzzed with patrons’ latest stories from the nearby woods and waters. Coffee flowed freely as anglers bent over the dozens of boxes of flies, hoping to pick correctly for the day ahead. Rusty Gates presided over the daily scene with eagle eyes, wry grin, and measured words. Fishing tips from this master were earned, not purchased. This tradition, while changed forever by Rusty’s passing, will continue in 2010 as Gates Lodge remains in business under the leadership of fly shop manager Josh Greenberg, who has worked for Rusty for the last 15 years.

“Rusty proved that people don’t fill their gas tank to fill their fry pan. They put on their waders to nourish their soul. Rusty did that for all of us, and our great-great-great grandkids. Sure, they won’t know it, but when one of them flips an Adams, or a Trico, over a rising brown in 2109 it will have Rusty’s name etched on it,” said Glen Sheppard, author/editor of the conservation newspaper The North Woods Call.

The quiet, unassuming Gates’ soon gained recognition for his expertise in fly-fishing, as well as his honesty and willingness to defend the resource. He developed a number of fly-patterns that became standard Au Sable fly patterns, introduced scores of people to the world of fly-fishing, and began to combine angling and conservation in such a way as to involve himself in some of the most influential coldwater issues in Michigan. In 1995 he was awarded the coveted Fly Rod and Reel Magazine “Angler of the Year” award for his conservation and cultural contributions to the sport of fly-fishing.

“Rusty Gates was a brave, smart, tireless champion of wild trout and the beautiful, magic places they abide. He lead by example; and he has touched and inspired us all,” said Ted Williams, noted Conservation Editor for Fly Rod and Reel.

In a legal case that would define his commitment to the Au Sable River, in 2003 Gates, as President of the Anglers of the Au Sable, challenged a US Forest Service lease that would allow exploratory drilling for gas below the famed Mason Tract section of the South Branch of the Au Sable. With the odds stacked against them, the Anglers prevailed in their case against the Forest Service, forever altering how the business of gas and oil exploration would be conducted in the fragile areas of Michigan.

“While Rusty will mainly be remembered for his role in protecting the Au Sable, he changed forever the way we look at and work to protect our water resources and wildlife. We owe it to Rusty to carry on his work and make sure children in every generation to come will be able to share the wonder and joy in Michigan’s wild places that are his legacy,” said Michigan Sierra Club President Anne Woiwode.

Calvin “Rusty” Gates, Jr. will be missed by the many who knew him. He was an intensely private man who could, when needed, organize hundreds of people around a cause. Considered by many as one of the most talented fundraisers and recruiters they’d ever met, Rusty will be remembered for his uninhibited love for the river and the river valley, and his steadfastness in doing what he and many others considered right and necessary for the resource. He is survived by his wife Julie, their children, and a large extended family.