The past two months have been filled with ever-changing news and information on the threat of Asian Carp to the Great Lakes as federal and state officials wrestle over the best solutions. Most of the debate has centered on immediate closure of navigational locks in the Chicago River system (aka “The Chicago Carp Canal”), which are considered the last obstacle separating Asian Carp from the Mississippi River and the Great Lakes. With the exception of Illinois, Great Lakes states and the Canadian Province of Ontario have been fighting to close the locks until a long-term solution can be established. Major resistance on this solution has come from the White House, Illinois, and the Chicago shipping industry. 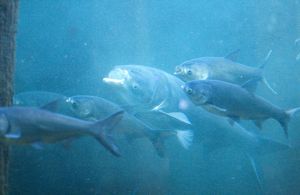 On Monday of this week, Michigan Governor Jennifer Granholm attended a White House “Carp Summit,” which was scheduled to open dialogue between Great Lakes governors and Obama administration officials. The result however revealed only that the federal government is willing to spend $78 million on studies, flood control, and expansion of status quo preventative measures. Instead of blocking off Lake Michigan from the Chicago River system, the White House revealed plans that would close the locks for three to four days per week. Unless $78 million is being spent on research to train Asian Carp when to swim upstream, this plan reveals that the federal government is content with throwing money at the problem in an attempt to passify political upheaval without making the right decision.

Aside from the disappointing solutions proposed by the executive branch of the federal government, Congress also took a look at the Asian Carp issue this week. The Water Resources and Environment Subcommittee to the U.S. House Committee on Transportation and Infrastructure held a hearing on February 9 on the issue, which we’re hopeful will lead to tougher Congressional action. MUCC submitted testimony along with fellow Michigan sporting and conservation groups urging the Subcommittee to take action on immediate and long term preventative measures, including the CARP ACT legislation introduced by U.S. Representative Dave Camp and U.S. Senator Debbie Stabenow. Watch the recorded hearing online.

On the legal side, last week, Attorney General Mike Cox announced the filing of a renewed motion with the U.S. Supreme Court that seeks to close the Chicago locks. The Supreme Court already denied the original motion in January, but issued its ruling a few hours before new evidence revealed that Asian Carp eDNA was discovered in Lake Michigan. Michigan also has a petition pending in front of the Court to re-open the 1929 “Water Diversion Case” of Wisconsin v. Illinois, which seeks the appointment of a “special master” to oversee implementation of a long-term solution to the Asian Carp Problem. Illinois and the Obama administration have until February 19th to submit briefs on this petition.

Last, but not least, MUCC has been busy gearing up for the annual “Great Lakes Days” in Washington, D.C. on February 23-24, where we’ll talk to members of Congress about the Asian Carp issue as well as other funding and legislative items that could benefit the Great Lakes and its $7 billion sportfishery.

Visit an Asian Carp public meeting near you!

The meeting also will be available via live web stream at: http://epa.gov/greatlakes/live. Those who cannot attend the meeting in person can submit questions on the Web site. When available, the framework and a transcript of the meeting will be posted on http://www.asiancarp.org/regionalcoordination. Comments on the framework may also be submitted online at the above website.

To discuss plans and get recommendations on Asian carp control efforts.