If DNR won’t plant ‘em big enough then we’ll plant our own! 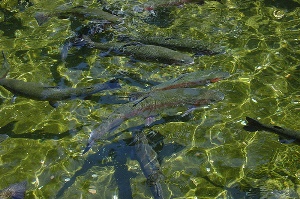 “Each year we hear about all those little trout piped in at Mio, Comins, McKinley and 4001 just in time for the Opener,” said Thomas Buhr, President of the ASBWPA.  “People moan they are too small, the big trout eat ‘em, etc, etc.  Thrown in for good measure is the usual banter that Mio isn’t as good a trophy fishery as it used to be.  So we decided to take action.”

Buhr noted that getting back to the “Good Old Days” may not be possible, but a stocking of quality trout would produce immediate results.  The ASBWPA is borrowing a page from other conservation associations such as the Escanaba River Association and stocking their own jumbo trout?

A public permit to stock the fish below Mio is possible because the stretch already receives stocked fish.  The hard part?  Stocking bigger trout costs a lot of money.  The organization decided to go with 15 inch brown trout, immediate trophies for most folk.  Every 100 15 inchers will cost about 800 dollars.  They want to stock 200 trout in September of 2010

The raffle is designed to raise the necessary $1600.  Tickets will be on sale at the ASBWPA website (www.asbwpa.org), through your friendly ASBWPA Representative, at Cabelas in Dundee on February 13th or at the 2010 MFFC Fly Fishing Expo in Warren, the place where the winners will be drawn that Sunday.  You don’t even have to be present to win!

“Those are good rods and can be used on the fish your money will help buy,” Buhr explained.

If this project goes well then the ASBWPA will make it an annual event.  They will either stock more 15 inchers, perhaps as many as 600, or look at the possibility of going to 18 inches.  Those Big Boys will run about 14 bucks a pop.

“We’d only consider 18 inch browns if there was an extended season,” Buhr added.