By now almost everyone pretty much knows the deal with parachute-style dry flies. They float with their bodies flush in the surface film with the hackle fibers splayed in a circle around the body (hence “parachute”), imitating very closely 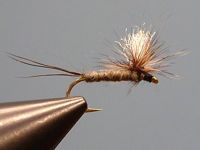 the attitude of natural mayflies as they drift downstream. The wing post around which the hackle is wound can be made of some highly visible color, making them easier for us middle-aged types to spot on the water. They are far more likely than their collar-hackled cousins to land in the correct upright position on the water when they are cast. Finally, because the hackle doesn’t actually float the fly, they don’t have to be tied with the most expensive genetic dry fly hackle to work properly. Effective, user-friendly, and cost-efficient—a no-brainer, right?

Well, yes…once they’re tied. Getting to that point can present a problem for some fly tiers. The tail and body of the fly don’t present that much difficulty, as they are identical in their proportions and construction to those found on a traditional collar-hackled dry fly. It’s the creation of the wing post that serves as the base for the parachute hackle that seems to intimidate a lot of tiers. There is a way to do this, however that is not only quite easy, but that substantially improves the performance of the fly, and it all has to do with materials.

My strong encouragement to you, especially if you’re just learning to tie parachutes, is to stay away from natural materials like calf tail and turkey t-base feathers and the like. They look great, but they’re hard to handle without a lot of practice. What I suggest instead is a synthetic material. There are many to choose from, marketed under various names—Float-Vis™ is a favorite of mine—but they’re all basically the same stuff. I like the synthetics for several reasons: it comes in literally every color you can think of, it’s far easier to handle than natural materials, it’s more 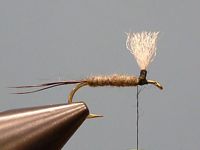 waterproof and therefore adds floatation to the fly, and, because its fibers allow air to pass through them easily, it is less likely to resist the wind, causing the fly to spin and twist the leader during false casting. It can also be mounted in a way that adds virtually no bulk to the body of the fly, allowing for a trimmer, more natural-looking finished product.

With the wing thus in place, you can create the rest of the fly as desired. The parachute hackle mounts just behind the wing post and is wound around it rather than the hook shank. The hackle can be tied off either just in front of the wing post on the shank or on the wing post itself.

By the way, informal research has shown me that the fish don’t much mind what color the wing post is—it’s more the silhouette they’re interested in. I have tied posts in blaze orange, hot pink, and screaming chartreuse and caught good fish on all of them. A black post is a great help on gloomy, overcast days, as well.

Once you’ve mastered parachute wings with synthetics, you can transfer your skills to the world of natural winging materials. Until then, this technique will get you on the water with these highly versatile and extremely effective patterns.