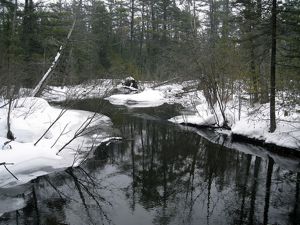 The Au Sable in Winter, Photo Copyright 2009 by Nina Asunto

The days are getting shorter, a little cooler, and the fishing remains good for both steelhead and trout. Remember last year at this time when we already had two weeks of solid snow?

The Big Manistee is running at good levels with water temps hanging  in the low 40s – odd for this time of year. It’s running relatively clear and there are some new steelhead that are coming into the river but not huge numbers of fresh recruits to join the fish already in the system. Look for the bite to come on both nymphs and eggs. On the gray, overcast days look for the brighter egg patterns to work with pale color when the sun is out. Nymphs that have been working include some of the old standbys: black stones, caddis and hex. This is also a good time to swing flies with that two-handed rod.

The trout fishing below Tippy Dam continues to be a pleasant surprise this fall with lots of fish coming to streamers and nymphs fished under an indicator. The bigger fish have been coming on streamers, but not exclusively.  Baitfish patterns like T&A Bunkers, Mummy Chubs and C&F Baitfish have been working well but daily color preferences can make the difference. The biggest common denominator has been white. Nymphs include small, natural pale eggs, scuds and BWO/pheasant tails.

The Upper Manistee is offering up some good fishing, too, now that the browns are done with their annual spawning ritual.  This time of year, with water temperatures being cool, fish a shorter sink-tip and retrieve it a little slower than normal.  Lately, I have found that fish are following streamers and are eating them when the retrieve is paused longer than normal – something that is usually a no-no when streamer fishing. Make sure your pattern has movement when paused. Mix it up and identify what the fish want – we do spoil them.

The Betsie and Platte both have some steelhead in them but what would really improve things is some more rain. With the Firearm Deer Season beyond us, we can get rid of that blaze orange hat and take advantage of stealthy approaches  to our favorite runs and holes. Look for the fish to be in the deeper, slower holes and slots since the temperatures continuing to drop.

Ed. Note: Check out the latest fly tying article on Ted’s website — he has a nice piece on tying and fishing the “Fin Clip,” which is a great pattern for imitating those little stocker rainbows that the DNR drops in many of our rivers each year. It’s a cool tie and is indicative of a style of fly that can be used to successfully fish the shorelines of the big lakes as well.

Years ago when I was living in the Mount Pleasant area I often fished the Chippewa River for smallies, and in that case the hatchery truck would hit the river near the end of May. The DNR stocked the Chippewa with trout, though I never found trout anywhere in the upper system with the exception of some cold spring-fed feeders way up in the system. I heard that steelhead were occasionally caught in the upper waters, but most of those trout became food for the resident bass and, lower in the system, walleye and pike. In any event, fishing patterns that mimic those stockers can really work out well.