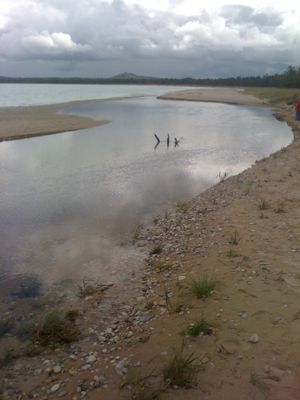 The recent cool weather and rain has got the fishing in our rivers good. The high water from a week ago has dropped to almost normal levels, the water temps are slowly dropping to a typical range and the wind has helped put some leaves into the water. And yes, some snow has fallen too, but thankfully not enough to stick.

The Lower Manistee still has some color to it and the levels are almost normal for this time of the year. Salmon continue to bend the rod for those in pursuit with fresh fish still entering the river while others are doing their spawning thing. The steelhead fishing is good with some days better than others. When it’s windy and there are lots of leaves flowing down the seams, try some fly patterns that are a little bigger and/or brighter to help the fish distinguish food from fauna. Secondary seams, too, are holding some fish as they typically don’t have as many leaves and the fish don’t have to dodge them. There haven’t been any particularly “hot” fly patterns, but egg patterns in clown, Oregon Cheese and Orange/Golden have consistently taken fish as have steelhead buggers, caddis and hex nymphs.

The Betsie is still getting fresh salmon in addition to fish that have been in a little while and are now doing their spawning ritual. Some coho/silver salmon are in the mix as are a few steelhead. The typical patterns are working including lots of egg flies and nymphs like sparrows, caddis, black stones and hex nymphs. With the forecast weather, look for salmon to be in the Betsie for a few more weeks

The Platte is really getting good numbers of fish in it being so close to the lake. A good number of cohos and kings can be found below the weir and close to Lake Michigan.

There haven’t been any particularly “hot” fly patterns, but egg patterns in clown, Oregon Cheese and Orange/Golden have consistently taken fish as have steelhead buggers, caddis and hex nymphs.

The Boardman in Traverse City has fish below the weir for you Urban Anglers. Since the weir went down late, there are what seems to be more fish below Sabin Dam than there typically is this time of year.

I haven’t been on the Upper Manistee lately, but I imagine the pre-spawn bite is going well for those fishing some big streamers for big brown trout. The water temperatures up there are very responsive to weather and you will find that fishing stable water temps is beneficial. If we have some cool nights (which are typical for this time of year), wait until the sun comes out and warms things up. You also might be surprised finding some fish lying in shallow water warming-up as they feel safe from the lack of angling pressure the past month and a half. Please leave all spawning trout alone – this is a natural reproducing river that needs those trout berries dropped, fertilized and ultimately hatched.

Enjoy the good fishing and awesome colors and good luck.