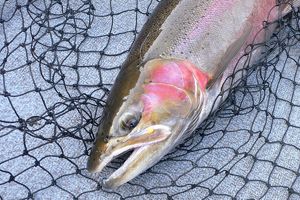 With a good shot of rain last week the water levels are up combined with some warmer weather – the fish are responding accordingly.

The Big Manistee River is up and has some color to it, and is in fine shape for steelhead fishing. Water temps are stable in the upper 40’s and the warmer nights and rare appearance of the sun will only help keep things where they are at. Fish are eating lots of yarn right now – egg flies in various colors: clown, Oregon cheese, golden, and chartreuse. Fish are coming to bugs, too, including steelhead buggers, shrimp, hex and caddis. Look for stoneflies to get active soon and the fish to notice. With conditions what they are, those looking to swing flies should be out there now. There are still a fair number of leaves yet to drop, but the majority of them have come and gone. Trout fishing below the dam is good for those nymphing eggs and/or retrieving a streamer a little slower.

The Betsie has a few salmon left in it, but anglers will find silver silhouettes in the darker water near the remaining spawning salmon. A majority of the fish that are in are skippers, which is a sign of bigger things to come – the adults that fight hard, and then look for wood to rub your leader against. Lots of egg patterns should fill your fly box, if you are looking to cash in on some chrome.

The Platte still has some salmon in it, but mostly cohos. Steelhead, too are entering the river but are moving up through the water pretty quickly. First light is best in the lower end and look for fish to be moving through the system.

The Boardman in town still has some salmon it in all the way up Sabin Dam as the weir is open allowing fish to move up. A few steelhead are in the water too – cover lots of water to find those opportunistic fish.

The Upper Manistee should be fishing well, but I haven’t been out there to test that hypothesis. With the increase in water flow and the warmer weather, the last of the terrestrial fishing should be good. Casting streamers for both pre- and post-spawn browns should be your best bet to get that colored-up brown trout. You will also have the water to yourself. Enjoy.

TED’S UPDATE: Lots of rain on Friday has really increased our local river levels. You will find the waters high, stained, and at times sketchy. But you will also find that the warm rain will send even more fish up from the lake as well as redistribute fish already in the system. Look for secondary and soft seams to be holding fish as they are after for a reprieve from the big water but also looking to eat all the eggs getting washed down. Steelhead anglers should use flies a little larger and brighter until things clear-up, and don’t hesitate fishing some bigger stuff like leeches/buggers and the sort. Finally, a wet fall!