This essay originally appeared in Northern Express and is reprinted here by permission of Rick Coates (editor). T|N|T thanks Rick for his kind permission.

Trout fishing in Northern Michigan sometimes takes a backseat to the famous rivers out west but not this past August, as a few hundred who fly-fish headed to Northern Michigan for the annual Trout Unlimited (TU) convention held in Traverse City August 22. 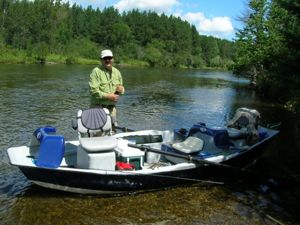 This TU convention was a special one as it marked the 50th anniversary of the national organization. The weeklong conference featured guest speakers, authors, seminars and guided fly fishing trips for anglers who came from several of the 400 TU chapters around North America. There were also several parties, including a formal dinner honoring the founding members.
According to TU spokesperson Erin Mooney, Northern Michigan was picked specifically to host this special celebration

“Trout Unlimited was started in 1959 in Grayling by 16 fly fishermen,” said Mooney. “It has since grown from 16 to now more than 150,000 members. So coming back to where it all started just made sense.”

While it has grown into a respected national organization, members from Michigan are proud to carry on the heritage of the founding members in their efforts to preserve and protect the fish habitats in the state.

A RIVER OF HISTORY

The driving forces behind the formation of TU were George Mason, President of American Motors, and George Griffith who lived on the Au Sable, just outside of Grayling. Mason passed away prior to the launch of TU, but his legacy continues not only through being the original visionary, but also by his contribution of 1,400 acres along the South Branch of the Au Sable, known as the Mason Tract.

“Michigan has 22 local chapters with more than 7,000 members,” said Dr. Bryan Burroughs, Executive Director of Michigan TU. “We are fortunate to have several world-class trout streams and more than 11,000 inland lakes and with the Great Lakes we have the largest source of freshwater in North America. As an organization we strive to protect, restore and work with other conservation organizations to preserve these resources.”

In Northern Michigan, there are five TU chapters and, according to Bill Fernandez, President of the Adams Chapter based in Traverse City, it is at the local level where the organization is most effective.

“At the national level the focus is more on public policy issues. Each part of the country has different issues so the local chapters are able to focus on their needs,” said Fernandez. “Every dollar we raise stays in the area to improve trout habitat.”

Fernandez, along with 26 other concerned fishermen from the area, gathered 13 years ago to form the Adams Chapter. This chapter focuses on the Boardman, Manistee, Pine, Pere Marquette, Rapid and Au Sable Rivers.

“There was a TU Chapter in Traverse City at one time but it basically disappeared,” said Fernandez. “Basically, some of us who fly fish the rivers in the area were concerned about several issues and wanted to take steps to improve and protect the quality of the trout habitat, along with educating the youth and others about river habitat and fly fishing.”

To date, the Adams Chapter has successfully generated over $200,000 primarily through their annual banquet held each spring with all dollars going locally to “support conservation efforts and repair the stream deadening effects of erosion, sedimentation and over use.”

“Some of our projects are very visible to the public such as the decking at Mitchell Creek along the TART Trail, and the fishing decks at the YMCA,” said Fernandez. “Other projects that are less visible have been the work on the North Branch of the Boardman where we have improved the quality of the trout habitat and certainly our work over the years of funding the removal sand from the Boardman, which is a major threat to trout habitat.”

The Adams Chapter takes their name from dry fly of the same name – dry fly being the pattern of artificial fishing lure. The Adams pattern is a popular pattern in Northern Michigan and was developed by Lon Adams, one of the founding members of TU. The fly pattern was perfected by Len Halliday of Mayfield.

Northern Michigan trout streams have reached legendary status among those who fly fish. Certainly the most famous is the Au Sable, known as “The Holy Waters.” Other rivers of note include The Boardman, The Pere Marquette, The Jordan, The Maple, The Black and The Sturgeon.

It is the goal of local TU chapters to protect that legendary excellence.

“We now number over 300 in the Adams Chapter,” said Fernandez. “All of the Chapters in Northern Michigan are very active, it is a great thing. TU is a wonderful organization. It is not a fishing club, sure we fish, but as an organization and local chapters our focus is about preserving these rivers and the trout habitat for future generations.”