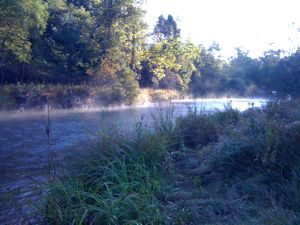 Morning on the Pere Marquette

This sunny, warm and dry weather is scheduled to leave early next week and the salmon fishing should respond significantly. Lots of attention and time on the water by anglers has been spent on the local rivers in pursuit of salmon but the numbers are not where they should be for this time of year.  Thankfully, the thermo cline in Lake Michigan is shallow and the fish are close to the mouth and are waiting for a bump in the river flow.

The Betsie, despite its early start this year has slowed down. There are fish to be caught and thankfully the recent change in wind direction has got some fish moving through the system. There are more fish on gravel but it’s early. Look for fish in runs and slots and with this high sun – in the wood.  There haven’t been any magic patterns working – just mix them up and cycle through some of your favorites. Mine include: muddlers, large black stone fly nymphs, caddis, hex, sparrows and wooly buggers.

The lower Manistee is still in need of some rain to bring fresh recruits into the river. There are fish there, but after last week’s pending world record brown trout being caught down there the pressure has increased and has what salmon are in there hiding. With the high sun, look for fish to be amongst wood and in shady areas. The change in the weather forecasted is just what is needed.

The Boardman has some salmon in it below the weir and into the mouth of the bay – it’s not the most scenic, but close to home if you have a limited time schedule. Those looking to get out for trout only have two more weeks before the regular trout season ends and the Upper Boardman closes. Think terrestrials and wet flies and get away from some of the hard fished areas – it’s been a long season.

With the slow down in salmon, I have been able to spend some time floating clients on the Upper Manistee for trout. There aren’t many bugs around but a few white millers, BWOs and tricos are still coming off. An angler with a long cast to the seams and runs will find the terrestrial fishing pretty good right now. With the water clarity being so good/bad, stealth is as important as ever but prepare to be rewarded.  If fishing in the evening, consider sticking around until dark and drag a mouse pattern for something of size.