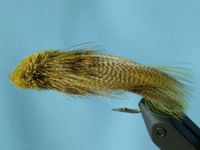 The Zoo Cougar has become a staple fly for Northern Michigan big game fly fishing. I tie and fish the Zoo Cougar when I’m chasing large brown trout on the trophy water on the Au Sable below Mio and can report that it is a fly that can move large fish even in the middle of the afternoon. As Kelly makes clear in his book on fishing streamers for trophy trout, the actual tie is really only half the game — the other half is learning how to fish it effectively, as the issue of casting and retrieving technique is just as important as the fly itself.

Because the fly is unweighted, Kelly advocates fishing it on a sinking line with a short leader. The fact that the fly is unweighted (among other things) means that it flutters and ungulates as it stripped through the water in a more natural way — more in motion — than it would if it were a heavy fly tied with a lead tape or lead-wrapped body. By casting the fly right to where fish are likely to be holding, and then stripping it fast like a bait fish that wants to get the hell outta there, is key to getting larger predators to chase and hit it. Kelly rightly notes again and again the importance of understanding that large fish are predatory meat eaters, and that, as alpha fish, are tuned-in to opportunities to kill and eat wounded and confused baitfish.

In this week’s episode of The Weekly Fly, Kelly teaches how to tie and fish this effective fly for catching large trout. It is worth a look.

Once you master the intricacies of the Zoo Cougar, check out the articulated version — a real monster in the water that also has the potential to catch monster trout — Kelly calls it the “Heifer Groomer.” It is an absolute beast. Watch your backcast!