The following is the third in T|N|T’s four-part series on tying and fishing hopper flies, and on the the joys of Michigan midsummer trout fishing. Look for the last installment early next week. 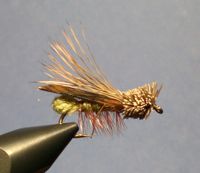 If I could carry only one hopper pattern in my fly box, it would have to be A.K.’s Hopper. Like all of A.K. Best’s fly patterns, it is meticulously well-thought-out, with every detail born of years of careful observation on the water, which is undoubtedly why it works so well.

A former Michigander, A.K. is well-known to readers of John Gierach’s books and essays as Gierach’s long-time fishing companion on his angling adventures in Colorado (where they both reside) and across the U.S. Best is also a household name in the fly tying world, as he is one of the most highly-respected and commercially successful fly tiers in the country. His books include Production Fly Tying, A.K.’s Fly Box, and Dying and Bleaching Natural Fly Tying Materials. He has also done a number of excellent instructional tying videos.

According to A.K., his hopper is an amalgam of his favorite features from three other well-known fly patterns. The palmer-hackled body was borrowed from Joe’s Hopper (a/k/a the Michigan Hopper), the clean, simple wing design hails from Ed Shenk’s classic Letort Hopper, and the spun-and-clipped elk hair head comes from Dave Whitlock’s Dave’s Hopper. The result is a high-floating, durable, relatively easy-to-tie fly that rarely fails to ring the midsummer trout’s dinner bell.

1. Start the thread one hook-gap width behind the eye and wind to the beginning of the bend. Wind back to the starting point. Tie in the end of the yarn at this point and once more wind to the bend, this time lashing the yarn to the shank as you go.

2. Twist the yarn tag to form a loop extending a hook-gap length beyond the bend. Take six or seven firm turns of thread at the bend to secure this body extension in place.

3. Tie in a brown dry fly hackle directly over the loop tie-down at the bend. Advance the thread to the starting point, then wind the yarn forward to that point, tie off and trim so that there is an abrupt “drop off” from the end of the thread to the hook shank. (This is important!) 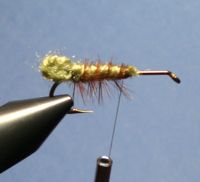 4. Spiral-wrap (i.e. palmer) the hackle forward in open turns and tie off directly over the yarn, maintaining the abrupt “drop off” transition from body to bare hook shank.

5. Clip a segment of turkey quill equal in width to the hook gap. Fold the segment lengthwise and snip the broad end at a 45° angle such that there is a “V” shaped notch in the end. Tie in the opposite end directly over the yarn and hackle tie-down.

6. Cut and stack a small bunch (10-12) of hard, shiny deer hair and tie in directly over the underwing tie-down. DO NOT TRIM THE HAIR BUTTS! They will be trimmed when you are shaping the spun-hair head.

7. Cut, stack, and clip the tips from a small bunch of elk hair. Spin and pack with the butts facing toward the rear of the hook. Repeat this process with a second bunch, again with butts to the rear. Tie in a third (and final) bunch with butts facing forward.  Whip finish and cut thread. 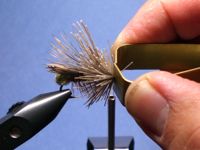 8. Using a razor blade or scissors, shape the head. Trim the bottom flat (careful not to cut off hackles!), then each side. Trim the top at a slight angle as shown in the photo. With this cut you will also trim the butts of the overwing hairs, which were left in place to prevent you from accidentally cutting off the underwing itself. Neat, eh?