Jim Harrison: At Home in Montana 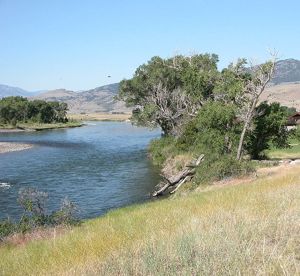 True|North|Trout reported in May on a story in the New York Times on ex-Michigander Jim Harrison’s Arizona adobe casita (“Catching Up with Jim Harrison”). Harrison winters and writes in Patagonia, Arizona, where he also hunts birds. But in the warmer months of the year he spends much of his time at his ranch home in Paradise Valley, just North of Yellowstone National Park, and just South of Livingston, Montana.

The Wall Street Journal now follows-up where the New York Times left off with an article and interview with Harrison, along with a slide show of photographs of his Montana home. His ranch is “nestled near the foothills of the Gallatin Mountains and near Yellowstone Park, his 10-acre property abuts a hay farm and a sheep ranch, where he shoots Hungarian partridges and sharp-tailed grouse in the fall. In the summer, he catches brown and rainbow trout on the Yellowstone River. The horizon is dotted with peaks—the white-tipped Absaroka Range and Bear Tooth Mountains to the east and the green foothills of the Gallatins to the west.”

I’ve been by his old farmstead on the Leelanau Peninsula just to the west of the Village of Lake Leelanau many times, and it is a fine farmstead, indeed, nestled in against a quiet, almost hidden Leelanau hillside. But I also know the Paradise Valley region quite well, too, and that long valley below the Absaroka mountain range, cut-through by the rolling Yellowstone River, is among the most beautiful places on Earth.