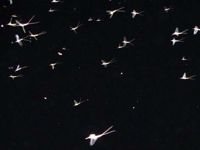 Hex on the Wing

Think the hex madness is over, eh? Well, that depends on where in the state you live, and also on whether you fish for smallies as well as trout. In this story from the Detroit News, Dave Spratt shares his notes on fly fishing Michigan’s “other” hex hatch — the one that takes place around Metro Detroit.

Depending on where you live and fish the hex are just getting warmed-up, particularly on the Huron river, just outside Ann Arbor. The Huron is probably Michigan’s finest smallmouth river fishery, though I think that the Kalamazoo and the Chippewa are close contenders for that title, too. Years ago I fished the Huron right in Ann Arbor one night with a friend and got hooked-up with one of the largest smallies in my fishing career. It all happened just after dark in a stretch of water right out in front of the medical school, and within sight of a bridge full of cars.

Spratt notes that for Detroit anglers who target trout, there is also Paint Creek (Oakland County) and the Clinton River (Macomb County), and both get a hex hatch this time of year as well.

The smallmouth is an underrated fish on a fly rod in so many ways. In addition to being an aggressive striker, and a hard-fighting fish, it is my favorite species on which to introduce a new angler to the art of fly fishing. If the time and river are right, the smallie will hit even a poorly-presented streamer aggressively, and the white fly (ephoron) hatch, particularly on mid-Michigan and southern Michigan rivers, can be phenomenal. It will give a novice angler the best possible shot at hooking a large fish after dark.