The Old-Fashioned: A Primer 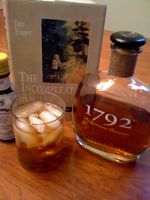 I got to thinking about the Old-Fashioned yesterday. What brought it to mind was reading Jim Enger’s The Incompleat Angler: A Fly Fishing Odyssey. In the chapter entitled “The Master of Frenchman’s Pond,” Enger relates some of the details of his friendship with John Voelker, the author of Trout Madness, Trout Magic, Anatomy of a Murder, Laughing Whitefish, ex-Michigan Supreme Court Justice, and U.P. native and consummate brook trout aficionado.

Voelker himself was never shy in his writing in talking about his traditional favorite beverage — the Old-Fashioned, and Jim relates in his own account that “for many years at Voelker’s fishing camp [Frenchman’s Pond] the bourbon old-fashioned was the official camp drink, and at four o’clock every afternoon the fishing stopped and a round was poured. They were almost always made in the big jelly jars and it didn’t take many drinks to kill a fifth” (p. 54).

Being a fly angler, an appreciator of fine spirits, and a fan of John Voelker’s work, I got the idea that I should try an old-fashioned out for myself. The truth is that I’ve had them before — made by bartenders — but suspected that there was something about what I was being served that missed the mark. So I did what everyone seems to do these day and Googled the term “Old-Fashioned,” was led to Wikipedia as always, and started on a bit of applied research.

To make what would otherwise be a long story a bit shorter, I made up at least a half-dozen versions of the beverage to try to discover a recipe that tickled me in the right places. It turns out that everyone who cares about such things seems to have a different theory on how a good old-fashioned is made, and being that everyone also seems to agree that it is among the very oldest cocktails around, it follows that there are plenty of versions out there to consider.

I can report, though, that will much sampling and adjusting, that this is my version — put forth for your consideration:

Begin with a old-fashioned glass. If no such glass is available, I can add that any glass decent enough to serve whiskey-on-ice will be good enough for this purpose. As remarked above, J.V. used jelly jars, so we don’t have to get too technical on this part. Make sure the glass is clean.

To this glass, add a cube of sugar. It will rattle around nicely when you drop it in the glass. I liked that part, especially.

Take a bottle of Angostura aromatic bitters, unscrew the top, and shake it firmly, twice, over the cube of sugar. As with Crazy Glue, a little bit will go along way, so don’t get too enthusiastic about this part. Two nice, firm shakes — then stop. Don’t push it, Tex. Really. Don’t.

Angostura aromatic bitters, as an aside, has an interesting history all by itself. But let’s not get distracted from what we’re doing here. Lots of time to talk about the history of bitters once the drinks are actually made.

You will now have a cube of sugar in the bottom of a glass, slowly melting and it will appear a bit brown from the bitters. Let’s call that a good start. The next step, however, commits me to a way of seeing the world, I guess. Because now my recommendation is to get a bit of soda water and add it to the glass. Fill to the point that the sugar cube is half-underwater and fighting to maintain its geometric integrity. This is controversial because many fans of the Old-Fashioned will tell you unequivocally that it is improper to put soda water in an Old-Fashioned. Period. By recommending that this be done, I am, I know, taking a position on this very issue that will not be popular with everyone. Feel free to write and express your hatred of me and all that people like myself represent — but that is how I like an Old-Fashioned.

Next come the part that is known as muddling. Mirriam-Webster defines ‘muddling’ as  “to mix confusedly” and, also, as “to befog or stupefy, especially with liquor.” I like the second definition quite a bit and will now consider this for my headstone. Anyway, get yourself a blunt object that will fit in the glass and use it to break up the sugar cube and mix it “confusedly” with the bitters and soda water. When you are finished you will have an odd brownish liquid to consider and perhaps sample. That is up to you.

This is the point that I add ice; after the muddling, but before the whiskey. I like ice. Always have. And in this case I fill the glass with quite a bit of it. Not to the top, but within striking distance of it. Crushed ice, if you have it. But regular ice is fine. You might take this moment and appreciate the fact that you live in a time and place that allows for you to have ice for this sort of purpose. On demand. So stop complaining about things all the time, will ya?

The next part involves whiskey, but I need to say a bit about this. First, for the record, I have no problem with Jim Beam or Jack Daniels. I approve of both, and they would make a fine cocktail, I’m sure. Nevertheless, I have three alternative recommendations because — in my opinion — they make a better drink, and they are better on their own, as well. Rather than Jim or Jack, dear reader, let me suggest either Woodford Reserve (a Kentucky Bourbon favored by many), Maker’s Mark (which goes particularly well in the Mint Julep, too), or — my favorite — Ridgemont Reserve 1792 (it’s 93.7 proof, so take it easy and think about your plans for the rest of the evening). You will not be disappointed with any of these. In any event, add about two-to-three ounces of your favorite choice to the iced glass you see before you. Mix it around a little.

The last step is a garnish, but when you consider the fact that you’re dealing in whiskey — which is basically paint thinner — whatever you use as garnish will end up in the drink in the form of a flavor-enhancer. In this case, though, it is simple: cut a thin orange slice like a round bit of tasty heaven. Cut in half. Then get a bottle of Maraschino cherries, select a big one, wrap the orange slice around it, pin it all together with a toothpick, and waddle the whole thing about in the glass, then let go and let it ride out the storm as part of the drink.

By the way, I live in Traverse City, the cherry capital of the world, and am very familiar with how Maraschino cherries are made. Don’t ask. Don’t ask too many questions about cheese, either. Or sausage.

I read about — but have not tried — another version of the cocktail in question: I read that scotch whisky makes a fine choice when it comes to the alcohol part. This does sound good, and certainly scotch would take things in a different direction, and if I did decide to go there would probably reach for my standard scotch for blended drinks: Johnnie Walker Red. Perhaps this is an excuse for further experimentation.

In any event, here’s to John Voelker. Slàinte Mhath.