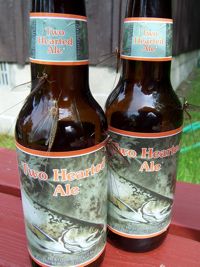 Finally after a cool spring, summer just came, and so did the hot weather. This week’s pressure-cooker and sunlight were just what we needed to get the bugs going on local rivers.

The Manistee has hex bugs, but it’s just the first couple of nights, and the numbers are decent, and it will only build over the next week or so. The heat has an effect on the bugs – they are emerging at odd times as well as traditional hours.  The hatch can be short-lived and sporadic and even isolated; if you don’t find bugs, go around the corner and you might find some. In addition to the hexes, there are still some brown drakes around and Isonycias. Some more of the big stoneflies can be seen bouncing on the water and that can be a great way to get a fish to leave their lair while waiting for the night’s mayflies. Look for the smallmouth bass to continue improve on the Lower Manistee.

The Boardman, too, has Hex in some sections. A lot of the bugs are coming from the ponds, and there can be prolific spinner falls as well as emergences. Make sure you have some brown drakes in your box and also be stocked up on gray drakes – a must for this time of year on the Boardman.

Grand Traverse Bay is still fishing well for carp and smallmouth bass. The recent heat has pushed many of the fish beyond the spawn and they are looking to eat some flies after their spawning ritual. Hex nymphs, gobies and leeches are best.  There seem to be fewer crayfish around for some reason and therefore crayfish patterns haven’t been as effective as in past years, but if you see some bouncing around, tie one on. The Smallmouth are continuing to build in numbers, too, cruising in the shallow water looking to eat. They can move fast so be on them quickly, with a good presentation, and hold on as they jump a few times during the fight.

Ted Kraimer is a professional guide and fly tier, owner of Current Works Guide Service, and field editor for True|North|Trout. His fishing reports will continue to appear in T|N|T and on his website.