Fishing with the MSU Fly Gals 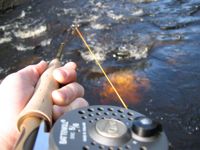 A couple of weeks ago I was in Michigan teaching fly-fishing to some Michigan State University graduate students, their friends and their colleagues. This is the third year that I have had the pleasure of teaching these ladies the fine art of fly-fishing.

I got this gig because my friend, Bill Taylor, a MSU distinguished professor, asked if I would be interested in expanding the educational horizons of his graduate students. Taylor is not only a firm believer in sound education for our future fish and wildlife managers but thinks they should have a “hands-on” experience in the sports that help fund fish and wildlife habitat conservation.

The first year was a great success and Taylor decided to let the ladies “recruit” the next year’s students. First they decided to name the group the MSU Fly Gals. I am told it is considered a very prestigious thing to be offered an invitation to the two-day school.

The ladies are hosted by Bill Demmer at Big Creek Lodge, a historic private enclave in Lovells, Mich. Demmer, a successful businessman from Lansing and member of the Boone and Crockett Club, is as strongly committed to conservation education through a hands-on experience as Taylor is.

Former students now return to assist me in teaching the class and also to enjoy a float trip on the North Branch of the Au Sable. The float trips are organized by Fuller’s North Branch Outing Club. Over the last three years Fuller’s has become the outfitter of choice for the MSU Fly Gals.

The North Branch Outing Club is rooted in Au Sable River history and has been around since 1916. T.E. Douglas came to the area to make his fortune in the timber business. He opened a store and hotel, The Douglas House, to offer first class food, lodging and access to the outstanding fly-fishing and wing shooting in the area.

The Douglas was the headquarters for the North Branch Outing Club. It was a popular sportsmen’s club in its day with members from the Detroit area automobile industry such as Henry and Edsel Ford, John and Horace Dodge and Charles Nash.

The Douglas House closed in the early sixties. In the fall of 1996 the Fuller family bought the property. They re-opened it as Fuller’s North Branch Outing Club with a bed and breakfast, fly-shop and guide service. It received historic designation by the State of Michigan and is on the Department of Interior’s National Register of Historic Places.

Fuller’s usually sends a couple of guides over to assist me with some of the casting instruction. This year Todd Fuller ably assisted the ladies with the afternoon on-the-water casting and fishing instruction.

This is a wonderful chance for me to visit and fish one of the more storied and historic river system in this country, the Au Sable. It is certainly Michigan’s most famous trout fishery with wonderful brook and brown trout fishing

The Au Sable River has four branches. The East and Middle branches join together just west of Grayling and flows east through town. The Middle branch, commonly referred to as the Mainstem, and the North and South branches all east of Grayling are prime waters for fishing.

On the Mainstem the “go to” fly shop is Gate’s Au Sable Lodge, owned by Rusty Gates a noted conservationist and advocate for the protection of the Au Sable river system.

The Au Sable has legendary hatches, most notable the brown drake and hexagenia or “Hex” hatch. Fishing in the late spring when we are there is usually very good from early evening until dark. After sunset, intrepid anglers fish mouse patterns near the banks to catch large brown trout.

For many years I flew over this part of the country on my way out west. That was a big mistake. There is some truly terrific water to fish in the Au Sable system. If you want to try some new water, enjoy some great northern Michigan hospitality and get in some fabulous brown and brook trout fishing I strongly recommend a trip to the Au Sable.

Tom Sadler is an avid fly-fisherman, guide, and instructor, and founder of The Middle River Group, an organization that provides diverse business expertise to the conservation and wildlife management community and the hunting, fishing and shooting sports industry. Previously, he worked in Washington with several conservation groups including the Izaak Walton League and the Congressional Sportsmen’s Foundation. He reports regularly on his sporting life on his website, Dispatches from the Middle River.