Ted Kraimer on “Fishing Before the Hex” 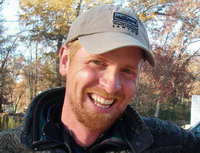 On his website, Ted Kraimer, owner of Current Works guide services and head guide for Traverse City’s The Northern Angler shares some of his secrets for catching June trout (“Fishing Before the Hex”), particularly during the twilight hatches. He also gives us a good, long glance inside his fly boxes and highlights a number of great-looking patterns that will fool even finicky Northern trout.

Although he profiles a bunch of bugs, two in particular caught my eye and sent me looking for my vice. The first, Ted’s Sulphur Emerger, is about the best loop-wing sulphur emerger I’ve seen in a long time, and with a little variation in color and size could be easily used to match a dozen different Michigan hatches, as he rightly notes in his article. The whole category of sulphurs, light Hennies, and PEDs is a bonanza for fly anglers, as the hatches are close, substantial, regular, and bring even big trout quickly to the surface. These are really my favorite hatches of the year as they come when the weather is warmer, the light lasts longer, and are predictable enough so as to not leave an open question as to whether you will see bugs when you make an evening run to the river. The hooks are small enough to hide tying mistakes but big enough that I can tie them on tippet without magnification.

The other pattern he highlights that really caught my eye was the bat fly. Years ago when I was living in The Village of Lake Isabella on the upper Chippewa River near Mount Pleasant I often fished the Chip at night with a fly rod for monster smallies. I almost always fished under the fluttering wings of bats — actual bats — as the treelines along the river were full of them and they made a meal out of the white flies that populate that river in such huge numbers for much of the summer and fall. I am happy to report, though, that I never caught an actual bat on a fly. Ted’s bat flies have little to do with actual bats, though, and fishing with bat flies isn’t like mousing on the P.M. — the bat fly is meant to imitate the Baetisca, what TroutNut rightly calls “a sleeper” hatch. Ted highlights Regan’s Bat Fly Spinner as a good hatch-matcher. This particular spinner is a little thing, but on the Boardman, the Manistee, or the AuSable, as Ted notes, having a few in your box could make the evening in June. Tie ’em up and give ’em a spin.