The following is the last installment in T|N|T’s four-part series on tying and fishing hopper flies, and on the the joys of Michigan midsummer trout fishing. Bryon Anderson will be back in the near future with another entertaining series. 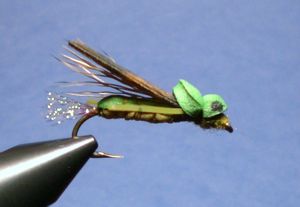 Fly tiers are funny about patterns. On one end of the spectrum are strict purists who stick to the tried-and-true classics, insisting on adherence to the original pattern and all-natural materials, and on the opposite end are those who seem born to innovate—people who see everything from cat hair to fingernail clippings as potential pattern ingredients.

Harrison Steeves, a former professor of biological sciences at Virginia Tech and contract tier for Umpqua Feather Merchants, is no stranger to innovation, as evidenced by his many signature patterns that marry natural and non-traditional materials, and that also happen to catch the bejeezus out of trout. Among his inspired creations are the Steves’ Firefly, the TransparAnt, and this week’s grasshopper pattern, the Crystal-Butt Hopper.

This is a great pattern to  have in your box in late summer, near the end of hopper season, when the trout—especially those in streams that get lots of pressure—may have gotten wise to the more traditional patterns by seeing so many of them. It seems to still say “hopper” to educated fish in a way that’s just different enough to re-pique their interest. I have had large trout follow, inspect, and refuse two or three flies that looked way more like a real hopper to me, only to blow up on a Crystal-Butt the instant it touched the water.

Keep a few Crystal Butt Hoppers tucked into a corner of your terrestrials box as an insurance policy for those wise old lunkers who think they’ve seen everything…you’ll both be surprised at how well it works.

1. Start thread just behind the eye, wind to the bend. Tie in 10 to 12 strands of flash at the bend so that it projects rearward. Trim to 3/8” length.

3. Trim the end of a 1/8” strip of underbody foam to a point and tie-in directly over the shellback tie-down.

4. Tie-in ribbing material just ahead of body tie-down. Wind thread forward to a point one hook-gap width behind the eye. 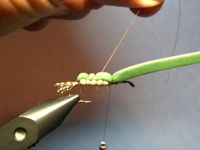 6. Wind thread forward 2 to 3 turns ahead of body/ribbing tie-down. Cut a strand of rubber leg material about 1 ½  times the length of the shank and tie-in by its center. Pull one-half to each side of the body and wind thread rearward to the body tie-down—legs should protrude rearward at about a 45° angle from the body, as shown in the photo.

7. Cut and stack a small bunch of elk hair, and tie it in directly over the body tie-down. The tips of the hairs should be even with the rear of the bend. 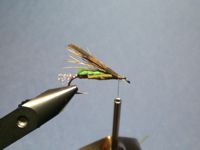 8. Tie-in a hook-gap width section of turkey quill directly over the underwing tie-down. Cover the butts of the underwing and overwing completely with thread, then wind the thread forward to the eye.

9. Apply dubbing to the thread and dub rearward, building up dubbing to the circumference of the body. Leave a gap of about 1/16” between the dubbing and the body/wing tie-down.

10. Tie-in the foam head disc over the bare thread between the dubbing and the body/wing tie-down, with 2/3 of the disc toward the rear of the fly, and 1/3 toward the eye. Secure with 6 to 8 turns of thread. Whip finish and cut thread. Take a moment to admire the shape of the fly. Silently congratulate yourself on a job – done.

11. Add eyes on the edge of the foam disc with black permanent marker.