A Missive On Women in Waders 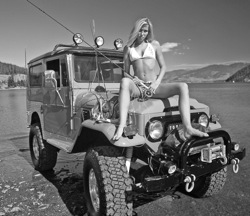 Maybe it is all just the evolution of that Hardy girl ad. Do you know the one?

It has come to my attention that something has happened in the margins of the culture of American fly angling which, if you really think about it, should have happened already by now.

But now it has.

Before I bring this point up — and for the official record — I’m no prude. I took great delight in discovering that even John Voelker’s camp at Frenchman’s Pond was adorned with a quality canvas nude. My discovery of this fact coincided with another less pleasant discovery, namely the fact that Russ, the owner of Right Brain Brewery in Traverse City, for some reason took down a rather fine and, I thought, quite tasteful life-sized black-and-white nude that he had hung over the bar these last few years. The nude did nothing to add or detract from the taste of his wonderful products, but did give you something to seriously consider while you were sitting at his bar munching on popcorn. Perhaps he felt is was distracting his clients from a full appreciation of his CEO Stout.

It is said that everything in life has its compensations. But I fail to see the compensation in this instance, in particular.

But I digress. The phenomenon to which I would call your attention is the permutation of rather well-produced fly angling calendars featuring bikini-clad young female anglers wearing hip boots (which I, for one, never realized were quite so sexy) and holding fly rods and generally making you wonder where precisely they are pinning their fly-drying patches and hanging their hemostats. 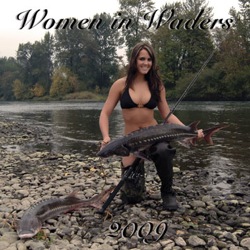 The first calendar of which I became aware was the aptly-named “Women in Waders,” which remains I think the benchmark publication in this area. But to this we must now add two more: “Girls Fly Fishing” and “Gotta Go Fly Fishing” (or is it “Girls Gone Fly Fishing”).

Is it some sort of sign when a sport like fly fishing finds itself on the receiving end of this particular type of attention? I get the part when professional wrestling goes down this road, or when a magazine like Guitar World puts out a cover with a model in micro-sized swimwear holding a Gibson Les Paul and leaning on Slash, but I’ll admit to being surprised to see the same treatment when it comes to fly casting.

Surprised, but not necessarily disappointed.

The truth is that fly angling has taken a turn in a certain direction… Eschewing the tradition of tiers giving flies the names of their fiscally-well-endowed clients (like the Adams), Kelly Galloup’s flies bear names like “Sex Dungeon” and “T and A Bunker,” and younger anglers in the sport are — in my view, anyway — both fishing more aggressively, more creatively, more refreshingly, and more passionately than ever. And part of this, oddly, is treating fly angling as a kind of extreme sport and making it part of an extreme sport culture, though I think in a way that for the most part fundamentally preserves the what is best in the sport’s “original” tradition and ethic. It’s hard not to see this in the culture of the younger guides working at the better fly shops, anyway.

What does this have to do with Women in Waders? Hard to say. Perhaps some of my friends in Flygirls would take a different view out of the blocks, and perhaps the creators of such products are simply appealing to a baser instinct and dragging us all down by our wader belts toward Gomorrah, and perhaps I’m looking for a connection here that could lead me to take a more charitable read on all this. And so perhaps I’m also being a bit naïve — wouldn’t be the first time.

I will say this — they are certainly nicely-photographed calendars.

I’m getting a bit verklempt. Talk amongst yourselves.