The ONE, The ONLY, THE RIVER

“A trout is a trout the world about.” Jimmy Calvin says in the upcoming fly fishing film release of THE RIVER from Third Year Fly Fisher. Certainly a true statement, so simple and yet elegant because we know there is something special about the trout that he speaks of.
We are looking forward to this weekend with much anticipation. It is the Trout Opener on many streams and rivers in Michigan, but for some that has lost some of its luster. Some of us cannot break tradition. Getting up to the cabin and stoking a fire in the fireplace and and sipping on a quality 18 year old scotch or bourbon perhaps, while sitting on the front porch, scent of freshly cut cedar combined with a soft charred aroma wafting through the air as you watch the slick smooth onyx-like glassy water glide mere feet from the wooden deck. You can hear the baritone muffled chuckles in the cabin perhaps laughing at how the big one got away earlier in the day. It is Opening Weekend. 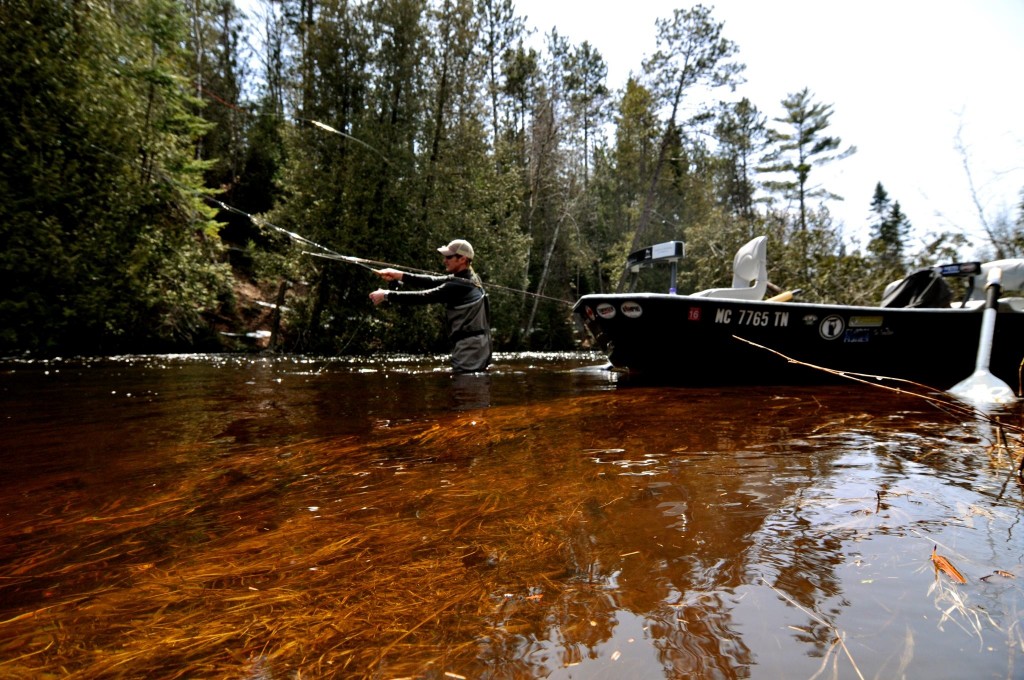 Casting on the Au Sable River

I recall as younger lad, my tying abilities at a very early stage of development, yearning for Opening Weekend, going up to Grayling with the family and staying at Aunt Rita and Uncle George’s house. My brother and I would sleep on an air mattress in a reading room so I could get up earlier than anyone else and slip out the front door to pursue the massive trout that eluded me the season prior. I was only fourteen, my beat on the river was either behind Penrod’s Canoe Livery or behind the Hospital, which also held a few escapees from the hatchery and a few other gluttonous browns that feasted regularly on the overfeed of pellets that visitors from the hatchery would toss at the fingerlings. Breaking the twenty inch mark was a colossal goal for a kid with a $45 Ryobi/Abu Garcia fly rod combo, but it was the names of fly anglers before me in a log book at The Fly Factory that propelled me. 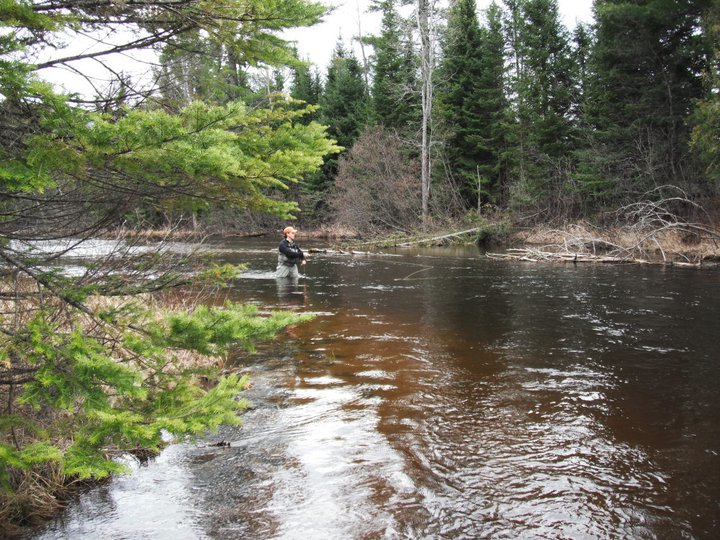 Working a rising trout on the North Branch Au Sable.

This weekend is no different for myself and many others. The lure and attraction of the trout we stalk beneath that slick moving water keeps us coming back. The history of a great river that has sustained human wreckage and proved to be one of the best in the midwest is the reason for making a film and countless books we cherish. Another reason I am looking forward to this weekend is the release of the much anticipated movie- THE RIVER. Saturday night will be the premier of THE RIVER at the RIALTO THEATRE in Grayling. Doors open at 7:00 pm and the show will start at 8:00. I spoke with Josh at Gates Lodge yesterday and purchased my ticket. He said they were going like ‘momma’s hotcakes’ – seating at the theatre is 400. Proceeds from the Film will benefit The Angler’s of the Au Sable, organizers hope to see a full house. Tickets can be purchased in advance at either The Old Au Sable or Gates Au Sable Lodge.
I got a chance to speak to RT from Third Year Fly Fisher at the Expo. I asked him if there were any inside stories in the film he could tell me about.
“No, not really, it was a huge two year endeavor, that had been rolling around in my head since Rusty wrote ‘Seasons on the Au Sable’.  I had the opportunity to talk to and interview so many great people from the area, from fly shop owners and guides to conservation members and locals who treasure the resource. You will recognize most and we hope to see a few at the showing.”

“Sales of the DVD are blowing me away. We haven’t officially released and we have pre-orders for 3/4 of the first run. We most certainly are looking at doing a second.” replied Robert when I asked how sales were going. The cinematography  is exceptional and I personally can’t wait to watch ‘Brothers Brown’ and ‘Summers’ at home on HD. There is a lot of excitement in the fly fishing community for this release. 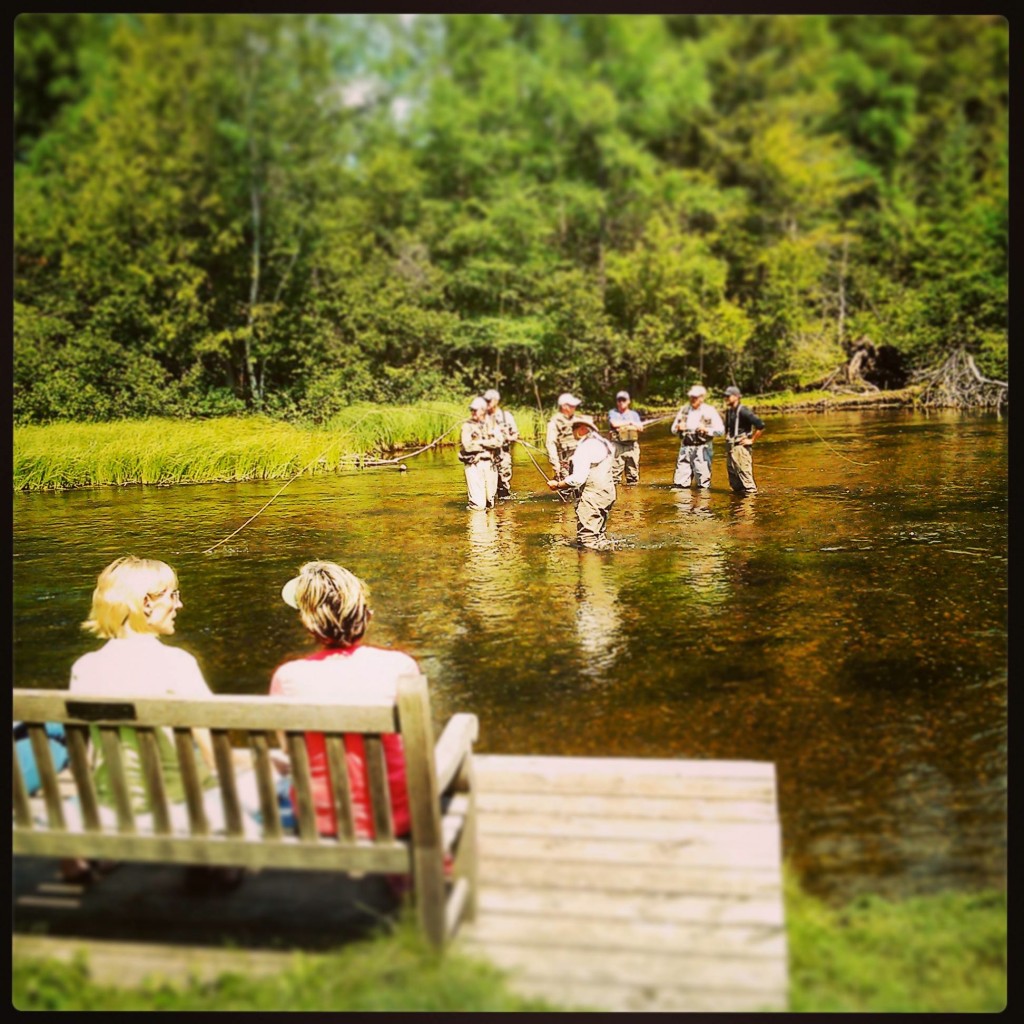 ‘The River‘ depicts a resource that is on the mend, and years in the making itself. Many believe it is on the right course, ‘we aren’t there yet’ exclaims Bob Linsenman. There were many people over the course of decades who thought this river was worth more than how it was being treated and abused. Being the birthplace of Trout Unlimited and the conservation that dates back to the fifties, concepts like limiting the DNR’s stocking practices and ‘Catch & Release’ were not only scoffed at but also rejected by many anglers. A process like this takes years to unfold, and the ground work was laid by some of the best leaders in conservation. Designation of a section of water as FLIES ONLY- NO KILL was absurd. But it had to be done. There was one man who was the driving force behind such an absurd idea, and we are here today to witness the benefits, and shall for many years and generations to come. The film is a proper tribute to the many men and women who travel from hundreds if not thousands of miles to wade in “The Holy Water”. I hope to see you at the Showing. 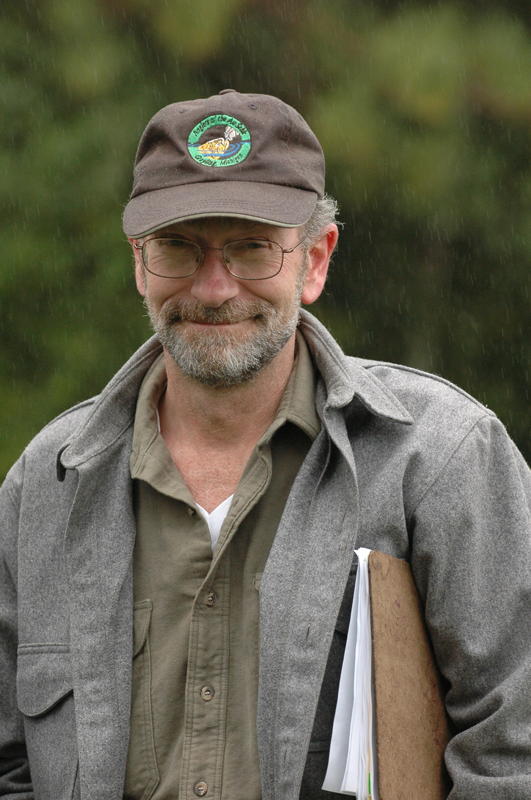 The man who had the plan, for the river, and for many.