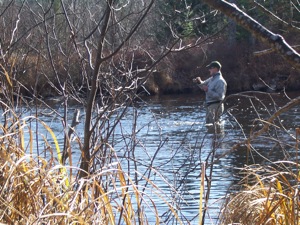 Kirk Novak Nymphs on the South Branch of the Au Sable

True North Trout is happy to present an interview with Traverse City fly shop owner, Kirk Novak. Kirk owns The Northern Angler — Traverse City’s independent fly shop. Originally from downstate, Kirk opened the shop a few yeras ago on Union Street, but recently moved his operation to Front Street just across from the Ace Hardware store on the edge of Slabtown.

T|N|T: How did you come to fly angling? What was your path to the sport like?

K|N: I grew up fishing, starting when I was four, and was a bass fishing fanatic for my whole childhood. College came and brought things that were more interesting than fishing so I got away from it for a few years. It was then, after school, sort of “for the hell of it,” that I bought a cheap fly rod combo and tried it. After (literally) yanking my first trout out of the Platte River, I was, as they say, hooked. Now I don’t see myself as a “fly snob,” but that is my primary fishing method for all species.

T|N|T: What are your favorite watersheds to fish in Michigan, and why?

K|N: I really enjoy the Platte for its small size and lack of traffic; the North and South Branches of the Au Sable (the mainstream is too busy for me); and, although I haven’t been there in years, the Rifle remains near the top of my list.

T|N|T: What’s your impression of professional fly angling guides? How can you pick out a good guide from the crowd?

K|N: Most guides out there are good, well-intentioned guys that truly want to help people enjoy their time on the water, and as a group I find that they are very respectful to the resource. The best way to pick a good guide is simply to ask around. People that don’t do a good job get a poor reputation that spreads quickly.

T|N|T: Last spring The Northern Angler was a co-sponsor of the Fly Fishing Film Tour … what do you think about new emphasis on the intersection of filmmaking and fly fishing?

K|N: We did the FFFT last year and had a lot of fun with it. We are definitely doing it again this spring. I love to see the proliferation of video and DVD releases out there. These guys are exciting and are engaging a whole new generation of fly fishers, which is key for the long-term health of the sport. Another key is that they are breaking a lot of the stereotypes about fly fishing being a bunch of old, rich guys fishing for trout. The film makers are traveling the world fishing for just about anything that swims, and I think it’s awesome.

T|N|T: What is the coolest innovation when it comes to gear that you’ve seen in the last five years?

K|N: I don’t know what I would say is the coolest innovation that I’ve seen over the last five years, but I have been impressed by one thing in particular and that is the incredible price-to-performance ratio in today’s fly rods. As a consumer today, versus five-to-ten years ago, there is absolutely no comparison. Today’s $150 rod blows away the $400 rod of just a few years ago. It extends to the higher end, too, but the “value rod” market is really remarkable now.

T|N|T: What are a few product lines that you think are under-noticed or underappreciated? In other words, what are some things that anglers not buying, but you think that they should?

K|N: The most underappreciated or neglected product area in fly fishing is, to me, fly lines. The average person, and especially the newer entrants in the sport, just don’t realize how important a good line is. People see $69 on a line and think that they can get more use out of their 4 year old line but I believe that the line is possibly the most important piece of gear you can have, almost as much as the rod. I would rather fish a garage sale rod with a brand new line than a Sage with a line that’s past its prime. Floatation, casting distance, and ease of casting are all things that you get from a good line.

T|N|T: You’ve spent some time as a director for the local chapter of Trout Unlimited… how would you like to see that organization grow and develop over the next five or ten years?

K|N: If I could pick one thing that I would like to see from TU it would be more hands on — getting dirty — “real” work. I am in a position at the shop to hear from a lot of people and their thoughts, concerns, etc. and one of the most common things that comes up is that people want to get engaged, and one of the best ways to do that is getting outside and doing something.

T|N|T: What’s the best part of owning a fly shop?

K|N: The best part of owning a fly shop is that I basically run a toy store. Everyone that comes in is looking for something that is going to help them enjoy their hobby/passion more. It’s really fun to see people light-up when they find an obscure fly, cool new tying material, their first good fly rod, or some gadget that they “can’t live without.”

T|N|T: What’s the worst part of owning a fly shop?

K|N: The worst part of owning a shop is the fact that, ironically, I don’t get to fish very much. Some people mistakenly think that the shop guy must fish all the time, but if the business is going to survive and thrive, it has to be the focus.

T|N|T: You recently moved your shop from Union Street to West Front Street in Traverse City. How did that move work out? Is your new space everything that you expected it to be?

K|N: The move to our new location is ultimately going to be very good for us. In the short term the move exactly coincided with the worst economic conditions that we have seen in decades, so that obviously didn’t help. The new location offers us room to expand, a classroom for fly tying classes, a better layout for product display, and we have parking behind the building as well as the side streets, so access is good and traffic is strong on Front Street.

T|N|T: When it comes to angling literature, what sort of stuff do you read and enjoy the most? And on the subject specifically of magazines what fly fishing rags do you read regularly and think have the best content?

K|N: As far as angling literature, I prefer the humorous side — Gierach is hard to beat. I don’t read a lot of the true literature of fly fishing, although there is a great deal of wonderful material out there.

On the magazine side, my favorite is The Drake. I describe it to people as “no ‘how to, no where to.’ Just good stories and photography.” It’s fun. From a more informative standpoint, both American Angler and Fly Fisherman are solid choices. There are other good magazines out there, but those three are staples in the rotation.

K|N: Since my knowledge of both poetry and auto mechanics is only slightly greater than zero, let me just say a bit about what I think makes fly fishing such a great pastime: What I see in fly fishing is that it truly has something for everyone.

Some people love to tie flies, and others never have and never will. Some people work on their casting like a professional golfer works on their golf swing — constantly perfecting, tweaking, improving on it, while others just want to get the fly “out there.”

There is a great deal of history and tradition in fly fishing that holds a special appeal to some, but not to others. If you want to be a minimalist or an obsessed gear junkie, then fly fishing works for both. Travel, solitude, company, big fish, lots of fish, no fish, competition, Zen-like contemplation — you name it, fly fishing can provide it.