Many people are aware of the pervasive outdoor culture of the U.P., but generally consider it confined to trolling on Lake Superior or deer hunting in the acres of pristine wilderness.  But one of the best kept secrets of the peninsula is its multitudes of inland fishing opportunities, including many first-class trout waters.  The city of Marquette, the largest in the Upper Peninsula, boasts easy access to many quality trout and salmon fisheries within several minutes of its boundaries. 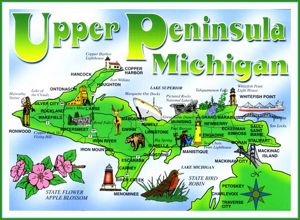 The Carp is one of the more popular spots near Marquette, as it is just a short drive from downtown. For the most part, however, the proximity isn’t noticeable.  A relatively steep river that empties into Lake Superior just east of Marquette, the Carp offers anglers chances to hone their skills in a variety of situations. The river is easily wadeable and wide enough to accommodate fly casting in most places. Some pools and runs can get rather cramped, however, so a short spinning rod might be a good idea to bring along. Two of the best access points are near the river’s mouth at the bridge on Highway 28 and near Marquette Mountain ski area at the bridge on County Road 553. The river flattens out near the mouth and fishing becomes fairly marginal until the salmon run. The best chances for fish the rest of the year are found off 553. The most productive spots tend to be the pools between rapids and holes underneath dead falls. Both dry and subsurface caddis imitations produce well, as do small Mepps spinners. Rainbow trout are the most abundant fish, and average eight- to twelve inches. Decent populations of brook trout and brown trout live in the river as well, and they are joined each fall by salmon and steelhead.  The river is open year-round from the confluence at Morgan Creek, allowing fishermen to enjoy salmon and steelhead action in the spring and fall.

Located in Chocolay Township east of Marquette, the Chocolay River is deeper than the Carp, but still easily navigated by wading fishermen. Chest waders might be necessary after a heavy rainfall. Nearly all of the river is wide enough for fly casting, save a few points where willows hang across the entire width. Brook trout are the primary species in the Chocolay, and the average size is eight- to ten-inches. They can usually be coaxed out from branches of submerged deadfalls with small spinners, but dry flies fished alongside the stream bank past overhanging vegetation works well too. The river joins with Big Creek several miles from Lake Superior, and the downstream portion is open year-round. The river gets good numbers of lake-run fish in the fall, and fishermen have good luck fishing from the public access site off M-28. The site is one of two handicap accessible fishing piers in the UP. The river is much slower in this area and the bottom can be very silty, so be cautious when venturing too far out into the water. During the summer months, good fishing can be found upstream of the bridge off Highway 41 outside the main township.

If you’re in town for a few hours or have some down time in the middle of your day, the Dead River is the perfect place to go. The Dead runs right through the city and has several popular access points. Its proximity to town is a double-edged sword, however, as parts of it receive much more pressure than most other UP trout waters. It used to be dammed at Tourist Park on the north end of Marquette until several years ago. The dam has not been rebuilt since, allowing the river to flow freely though that area. Although it is primarily known for its walleye, smallmouth bass and northern pike fishing, the Dead River also has a healthy population of brook trout and the occasional brown throughout. Anglers stack up near Tourist Park in the fall and spring for chances at spawning salmon and steelhead, but the spot is also good year-round for bass and trout. Access for the area is at the bridge on County Road 553. The river is good for fly casting or spin casting with either lures or live bait. Try deep pools and the edges of deeper runs. Additional access can be found off Wright Street through Marquette or upriver from the public boat launch off Forestville Road.

If river fishing isn’t your thing, or you simply want a day’s rest from fighting currents and overhanging trees, Strawberry Lake might be your ideal destination. The lake is located near the Marquette County Fairgrounds, and is only a few acres in size. No motorized boats are allowed, but kayaks, canoes, and inflatables are ideal for its waters anyway. The DNR has done a good job managing the lake for brook trout and panfish, giving anglers a legitimate chance at satisfying the 15-inch minimum size requirement. It has very little topography and bottoms out at around 20 feet, so the fish generally go deep during the heat of the summer afternoons. Evening time produces some good action, however, as the fish come up shallow to feed heavily. Dry flies are a good bet, as are small minnow imitations and spinners.

If you are interested in a guide service, Uncle Ducky’s Charters provides float or wading trips for most Upper Peninsula waters.

Trevor Pellerite writes to T|N|T from his Upper Michigan home in Marquette — Robert Traver country. He is a senior English major at Northern Michigan University. After he graduates, he would like to become an outdoor writer and fly fishing guide.