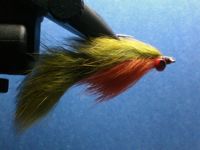 Even as we enjoy the long, balmy summer days, it isn’t too early to think ahead to the approach of autumn, when brook and brown trout begin to feed aggressively in anticipation of the rigors of spawning. Once their lust is consummated, the males will continue to strike at any intruder that approaches the spawning bed — especially a large, colorful streamer. When this time of year rolls around, the first fly I reach for is one of the deadliest steamers ever created: Scott Sanchez’ Double Bunny.

The Double Bunny’s effectiveness first came to popular attention when it was the winning fly in the Jackson Hole One-Fly Tournament an unprecedented three years in a row. Ever since then, anglers have been using the big, meaty morsel to drive outsized trout into a feeding frenzy. Its chunky profile, the two-tone color scheme, the undulating action of the rabbit fur, the “jigging” action imparted by the weighted eyes — you see a Double Bunny doing its thing in the water, and you just about feel like eating it yourself, it looks so good.

As great a fly as Double Bunny is, though, in its original conception it was just a messy pain-in-the-butt to tie. According to the original recipe, the undersides of the two rabbit strips were to be glued skin-to-skin along the length of the hook shank, and I hate glue. It gets all over everything, most notably the rabbit fur, causing it to clump together and lose all its seductive undulating action. Also, the only glues that reliably retain their holding power in the water are the ones that dry stiff and hard such as Superglue or Zap-A-Gap. This makes for rigid, crunchy flies that can’t possibly feel natural in the mouth of a fish, and I believe predators reject such flies more quickly than those that mimic the soft, chewy feel of a natural baitfish. Finally, beyond all considerations of realistic imitation, I just don’t like the idea of throwing chemicals into the water. It was with all this in mind that I set out to create an adhesive-free version of the Double Bunny.

The other improvement I wished to make involved the hook. The original pattern was tied on a 4x- or 6x-long streamer hook. Since it’s now pretty well known that long-shank hooks give hooked fish the advantage of extra leverage in its attempts to free themselves, I decided to replace the long streamer hook with a shorter-shank saltwater-style hook.

The version shown in the photos below uses a dark olive “magnum” rabbit strip to suggest the back of a Brook Trout, and a rusty orange “cross-cut” strip to mimic the fiery belly of the spawning Brookie. Another effective color combo for Michigan trout streams is a chocolate brown back with a pale yellow belly to imitate a small brown trout, and a light olive back with a white belly accented by a few strands of pink Crystal Flash makes a super baby rainbow. Tie up a few to match the dominant prey in your home water. Slam your creation against the bank on a stout leader and strip for all you’re worth, and hang on!

1. Start the thread 1/8” behind the eye. Build up two thread “bumps” about 1/16” apart. Seat the dumbbell eyes between these thread bumps and lash the eyes securely to the top of the hook shank. 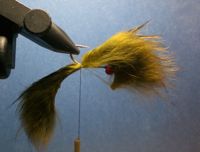 2. Wrap the thread to the bend. Cut a segment twice the length of the hook shank from an olive magnum rabbit strip. Invert the hook in the vise jaws, either by removing the hook and replacing it upside-down, or by rotating the jaws if you have a rotary vise. Pierce the strip at its midpoint with the hook point and thread it onto the hook shank. Moisten and divide the fur, and tie the strip down at the bend at this point. Pull up the forward section of the strip and impale it on the hook point to hold it out of your way.

4. Pull the back strip forward and tie it down immediately ahead of the eyes. Cover the butts of the two rabbit strips completely with thread. Complete the fly with several whip-finishes.